Home Cartoons conversations with Boyfriend No one else is going to think this is funny This is Why I Have Hundreds of Unpublished Posts...

This is Why I Have Hundreds of Unpublished Posts... 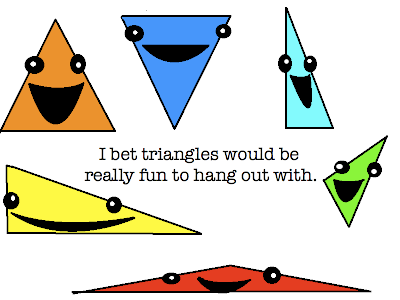 I thought it was really funny.  I showed it to Boyfriend, and he looked at it for an awkwardly long time before looking up at me and making a sound that was too tainted with confusion to be considered laughter.  So I was like "Get it?"
Boyfriend:  "No...?"
Me:  "It's funny because those triangles only look fun to hang out with because I drew them that way."
Boyfriend:  ...
Me:  "I could have drawn mean triangles, but I drew happy, fun-looking ones."
Boyfriend:  "Yes you did."
Me:  "And that's why it's funny.  I'm sure not all triangles are fun to hang out with.  Just the ones I made."
Boyfriend:  "What is wrong with you?"
Me:  "I don't get why you are having such a hard time with this!  Triangles don't have personalities.  I am projecting personalities onto the triangles!  And then I'm making a blanket generalization about all triangles based upon my own arbitrary projection!"
Boyfriend:  "Okay."
Me:  "No, you still don't get it!"
Boyfriend:  "I get it.  It's just really weird."
Me:  "You don't understand what a burden it is to have such an advanced sense of humor."
Boyfriend:  "I'm sorry.  It must be terrible."
Me:  "I bet this is exactly how Beethoven felt."
Boyfriend:  "Beethoven played the piano."
Me:  "I know that.  I was making an analogy.  Someday I'm going to be a famous genius and you're still going to be a hobo!"
Boyfriend:  "Still?"
Me:  "Yeah.  And I won't give you any money because you were such an asshole to me before I was a famous genius."
Boyfriend: "Well, in that case, can I make you some waffles or something?"
Me:  "Nope. Sorry. Too late. I'm going to go draw more pictures that you aren't evolved enough to understand."
And then I drew these: 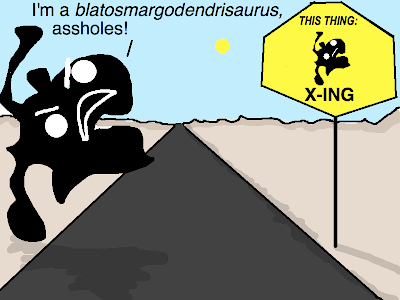 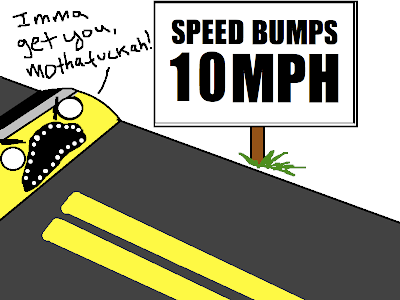 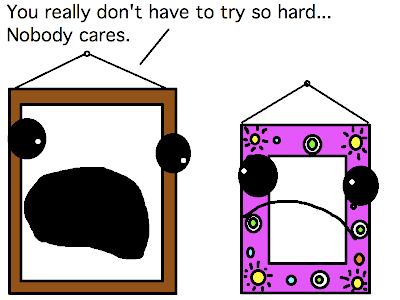 After about 45 minutes, Boyfriend was like "What are you doing?"
Me:  "Drawing."
Boyfriend:  "What are you drawing?"
Me:  "You wouldn't understand."
Boyfriend:  "Maybe I would..."
So then I showed the pictures to Boyfriend and he was like "The speed bump one is kind of funny..."
I bet even Beethoven didn't have to deal with this kind of adversity.
Facebook Twitter Telegram

Wednesday, 17 February 2010 Tags: Cartoons, conversations with Boyfriend, No one else is going to think this is funny