Tuesday, 16 February 2010
Facebook Twitter Telegram
The elementary school I went to was run out of a large, gaudy, 70's-themed house. The kindergarten was upstairs and the first and second grades were on the basement level.  The building was surrounded by woods. 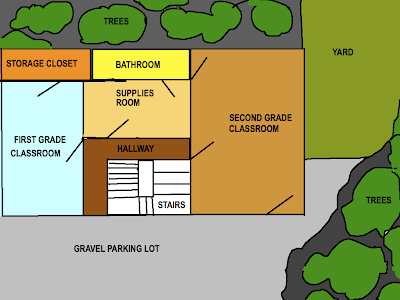 One year, on Halloween, our second-grade teacher told us a scary story.  It was called "The Skeleton Man" and it was unbelievably terrifying.  As our teacher was telling the story, we sat motionless, absorbing every gruesome detail. 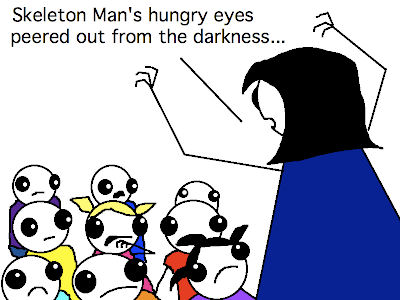 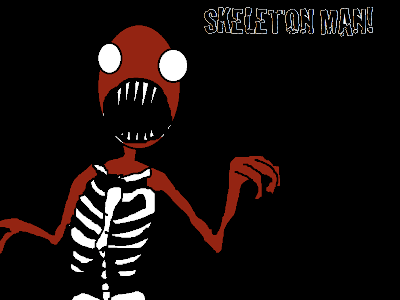 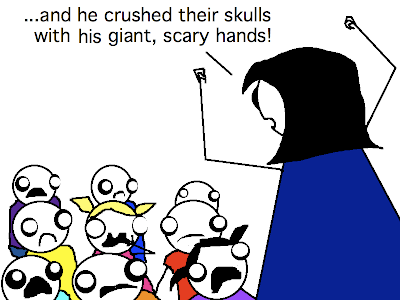 When it was over, a strange silence fell over the room.  It was obvious that each one of us was simultaneously filled with regret for ever agreeing to listen to such a horrifying tale and also trying to figure out how to hear more of it.  The rest of the day was tinged with a foreign, unsettled feeling - like we had all just been diagnosed with cancer.  We drifted around the classroom, doing our tasks quietly and robotically because we were too consumed with anxiety to experience any secondary emotions.
I went home that evening and sat petrified in the corner. 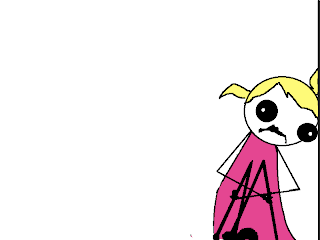 I knew that my life would never be the same - that everything I did from that moment onward would be tainted with my knowledge of the Skeleton Man.
The next day at school, I excused myself to use the restroom.  The basement bathroom was terrifying in and of itself - it was claustrophobic and mildewy, painted brown with weathered, yellow linoleum that curled up in the corners.  The shower was full of tattered cardboard boxes and the mirror was cracked in several places.  To get to it, you had to walk through a maze of boxes in the creepy supply room.  There was a closet adjacent to the toilet that was covered with a stained bed sheet.  But the bathroom took on an entirely different level of terror when I realized that the Skeleton Man almost definitely lived in the closet.  I couldn't believe that I'd never noticed before.

How many times had I sat there on the toilet, blithely relieving myself while the Skeleton Man watched me from two feet away?
From then on, I refused to use the basement bathroom.  At first I tried thinking of excuses to go upstairs to the kindergarten so I could use their bathroom.   I would suddenly spring up from my desk and say "I think I hear my sister calling me, can I go check?" or "I just remembered that Ms. Brunton said she wanted me to bring her this piece of paper" or  "I hope the kindergartners are okay... maybe I should go make sure?"   This tactic was rarely successful, so I opted instead to sneak outside and go to the bathroom in the woods behind the school. 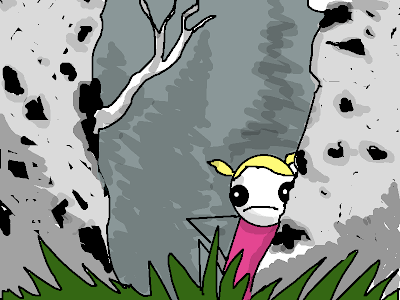 Whenever I had to go, I raised my hand and asked my teacher if I could have permission to use the restroom.  I clearly annunciated the word "restroom" in case anyone should doubt my actual intentions.  Then I would stomp loudly down the hall and through the supply room, stopping just short of the bathroom.  I would then turn around, sneak quietly back the way I came and slip out the door.  Once I was outside, I would break into a sprint to avoid being spotted on my way to the woods.  The process became even more complicated in the winter months because I couldn't just grab my shoes and coat on the way out the door to "use the restroom."  People would begin to suspect something.  No, I had to brave the snowy forest barefoot.  It was worth it, though.  I remember watching as my foolish classmates left the room to use the bathroom, and congratulating myself on being smart enough to avoid the life-threatening mistake they were making.
My little plan couldn't last forever, though.  Sometime in the spring, I was caught peeing behind a tree by the first grade teacher, Mrs. Davison.   There was several months' worth of toilet paper scattered around me, so it was clear that this was not a one-time offense.
Mrs. Davison:  "Allie!  What are you doing?"
Me: "Looking for ants."
Mrs. Davison:  "What's all this toilet paper doing out here?"
Me:  "I don't know.  It must have blown here with the wind."
Mrs. Davison:  "I see.  And why are you peeing in the woods?"
Me:  "Oh, I was just out here and I had to go."
Mrs. Davison:  "How about you come inside and use the real bathroom..."
At that point I started weeping and screaming about the Skeleton Man and how he lives in the closet and if I used the inside bathroom, he would kill me and then I would never get to grow up and be a veterinarian and my family would probably cry and wish that I had never used that stupid bathroom and my mom would yell at Mrs. Davison for making me do it because if I died it would be all her fault!
I'm sure it was quite a spectacle.
For the next week or so, I avoided peeing altogether.  I would hold it in until it became painful and I had to sit rigidly in my chair with my legs crossed.   Eventually I had to face the basement bathroom, but I tried my hardest to make sure that those terrifying encounters were kept to a minimum.
The next year, our class was moved to a different building with a different bathroom, but I never completely got over my fear of the Skeleton Man.  Even as an adult, I sometimes feel like he's hiding in my bedroom closet or in my basement with the orc rapists. 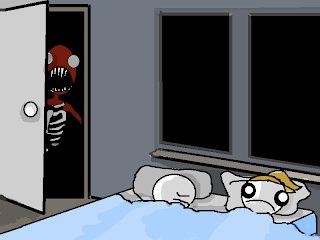 UPDATE:  There have been a lot of questions regarding the details of my elementary school, so I thought I would elaborate a little.  I didn't go to a traditional public school, but we definitely weren't a commune :)  The fancy, normal-looking, brick building in which the school started was condemned (because of asbestos) and the school had to move suddenly.  They hadn't found a suitable permanent location yet, so that's why we had school in the old house.  Before the school bought the house, we had to have class in a tiny upstairs library in a church.  It smelled like moth balls and it got really, really hot during early September.  The house was an upgrade for sure.  The school owned the house, so it's not like we were just running around in someone's living room or anything.
Regarding the barefoot thing: because we went to school in an old house that had carpeted floors, we had to take our shoes off at the door.  And I don't know how I was able to escape detection for so long.  I mean, we didn't have hall-monitors or anything (the school was far too small for that), but it is still pretty amazing that I was able to sneak around the teachers.
Facebook Twitter Telegram