Home Cartoons Why I Don't Use a Radio Alarm Clock

Why I Don't Use a Radio Alarm Clock 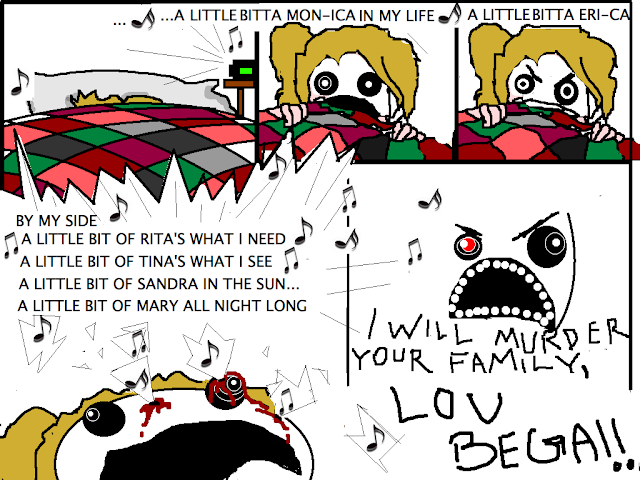 Because waking up to "Mambo Number Five" by Lou Bega feels like being stabbed in the face with music.

UPDATE: Just because I feel that listening to "Mambo Number Five" by Lou Bega is like being bludgeoned repeatedly with the worst part of every song ever and it's even worse because it gets stuck in your head for six months and pretty soon you are on your knees clawing at your face, yelling "GET IT OUT! GET IT OUT!" until you seriously start to consider fishing it out of your brain with a meat hook, doesn't mean that everyone feels that way.

Alert reader, Kiley, said she likes Lou Bega and I was like "WHAT???" but then I realized that he probably didn't reach the top of the charts because he made everyone bleed from the face.  The reality is that some people like Lou Bega.
Curious about this phenomenon, I asked Kiley what she likes about him and she replied that his music makes her feel like dancing.
This made me realize that that is exactly why I don't like "Mambo Number Five" by Lou Bega.   It's like Lou Bega is standing right there, prodding you and yelling "HEY!  GET UP AND DANCE!! DANCE BECAUSE WE'RE HAVING FUN! FUNFUNFUNFUNFUNFUNFUN!!!! PARTY TIME!!!"
And then I'm like "No Lou Bega, not party time..."
And Lou Bega is like "YES PARTY TIME!!! PARTYPARTYPARTYPARTYPARTY!!!!!"
And I'm like "SHUT UP LOU BEGA!  IT'S 5:00 AM!!"
And Lou Bega's all "FUNPARTYFUNPARTYPARTFUNFUNFUNPARTYPARTYFUN!!!!"
It's like being raped with fun.
And that's why I don't like "Mambo Number Five" by Lou Bega.
Facebook Twitter Telegram