Saturday, 23 January 2010
Facebook Twitter Telegram
Boyfriend and I were sitting innocently in our living room, watching a movie.  Then I heard a sound like grinding metal coming from outside and I was like "Do you hear that?"

Boyfriend: "I'm not familiar with that sound."

Me: "Listen! It sounds like someone swinging on a rusty swing, only they're swinging really, really furiously. Like I don't know if it would be possible to swing that furiously. It's way more likely that it's robots having sex in our yard."

Boyfriend: "You should go check."

Me: "I don't want to go out there! I have no idea what could be making a sound like that. It's probably dangerous."

Me: "I'm pretty sure dogs aren't capable of making that sound."

Boyfriend: "No, that's definitely Rustle. I can hear him barking."

Me: "NO! There's another sound. A different sound. HOW CAN YOU NOT HEAR THAT???"

Boyfriend: "Because I'm not crazy?"

My curiosity and the urge to prove that I wasn't actually insane finally outweighed my fear of what might be on the other side of the door. I put on my hero-face and went outside.

I don't know if you've ever seen a dog battling a goose/monster, but that is what I saw when I opened the door. It was like The Gladiator out there, only with way more violence and robot-sex sound effects. At first, I was like "No Rustle! BAD DOG!" because I didn't want him to kill the goose. I chased him to the other side of the yard and by the time I turned around, the goose was inside my house. I heard Boyfriend yell "OH SHIT!!!"

Boyfriend: "IT'S TRYING TO BITE ME!! WHY IS THERE A GOOSE IN OUR HOUSE, ALLIE??? WHY IS THIS HAPPENING TO ME?!"

At this point, the goose turned it's reptilian gaze upon me. Everything was still for a moment.

The next ten minutes were almost exactly like the kitchen scene in Jurassic Park - Boyfriend and I running around chaotically, trying to hide - the goose pursuing us like a bloodthirsty velociraptor.

If you have never been attacked by a goose, you may be wondering what is so scary about geese. Allow me to illustrate with a story from my childhood: 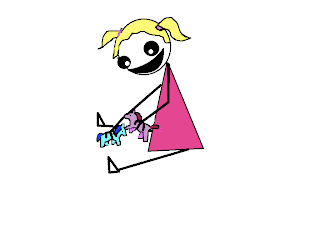 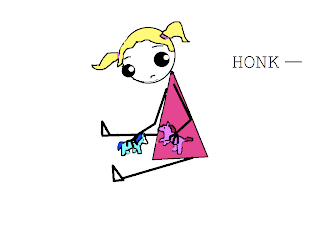 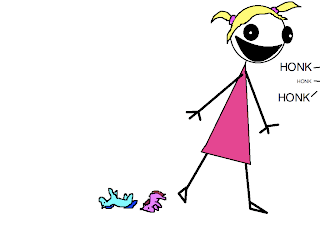 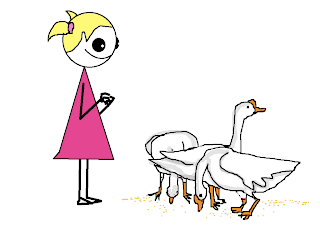 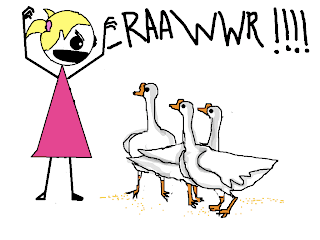 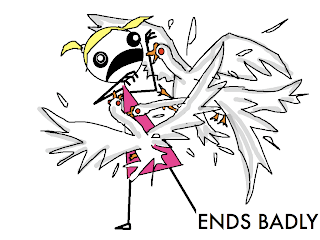 If you fuck with geese, they will bite you in the face.

Luckily, Boyfriend and I have blankets hung over all of our doorways to conserve heat and we were eventually able to trap the goose in our kitchen behind one of the blankets.  At this point, I got out the video camera because there was a feral goose-raptor in my kitchen, you guys.

After it made several charges at me, I decided that antagonizing the goose was probably not wise, so I retreated to the living room. The backlighting in the kitchen cast a sharp silhouette of the creature on the bed sheet hung over the door. I could see it moving closer.

We fled up the stairs to the safety of our room. We could hear it pecking the ground outside our door.

From our room, we called Fish and Game and they were like "Is it a wild goose?" And we were like "It's whatever kind of goose acts like a velociraptor..." and they were all "We don't know how to help you. Maybe you can trap it under a blanket and take it outside?" And we were like "Yeah, whatever."
After we got off the phone, Boyfriend said "So what are we really going to do with it?"
Me: "I don't know. Maybe we can trap it in the basement?"
Boyfriend: "That's a terrible idea. Do you really want that thing living in our basement?"
Me: "No. I don't know why I said that."

We decided that trapping it under a blanket was probably our only option. Unless we wanted to live in our room forever.
After a dramatic struggle, we were able to trap the goose, put it in the back of Boyfriend's car, drive it to a nearby duck pond and release it into its natural habitat, even though I'm pretty sure I'm wrong about that and its natural habitat is actually the Jurassic period and it's probably going to murder those poor ducks and then lurk under the surface of the murky pond, just waiting for hapless children to get too close to the edge of the water.
Facebook Twitter Telegram