I Made Friends! And an Arch-Nemesis!

Sunday, 1 November 2009
Facebook Twitter Telegram
Guess what?
I made some friends yesterday.  In the real world.
Guess what else?
The Crap Blog Detective is back, and this time he insulted my furniture.  Uh oh.
What do these two topics have in common? 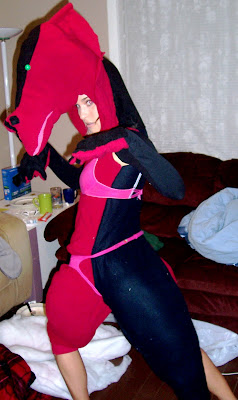 That's Bruce.  Actually, it's me inside Bruce.  Bruce is a dragon costume that I made out of a Snuggie, a pair of nylons and a dog bed.  He is wearing sexy underwear because Halloween is always a good excuse to dress like a whore, especially if you're a dragon.
You may be wondering what Bruce has to do with anything.  Well, remember how I said that I made friends last night?  Normally, I'm pretty shy around new people - but not when I'm wearing Bruce.  When I'm wearing Bruce, all of my self-doubt and social paranoia just melt away leaving behind pure, unadulterated confidence.

As soon as I put on Bruce, I have abilities.  I can suddenly do things I never dreamed of.  I can walk into a party full of strange people and not end up hiding in the bathroom with a bottle of Vodka until I'm drunk enough to not care about how awkward I am.  I can dance to 80's music AND gangster rap without relying too heavily on the lawn-mower dance.  I can comfortably talk to strangers about breast milk, glory holes and blow jobs.  I can enter a sexiest costume contest and win - even though I didn't actually win because some girl dressed up as a sexy gladiator and wore a push-up bra and put glitter on her cleavage and even though she wasn't nearly as sexy as me, no one was ready for what I brought and it kind of hurt my game.   I can lose a sexiest costume contest and still feel good about myself and my future.  Babies actually like me and don't start crying the second I get within ten feet of them.

I'm practically a superhero.  I even have an arch-nemesis now.   It's the crap Blog Detective.  And Kyle.

I think it's kind of fun having an arch-nemesis.  It gives my life purpose.  Now I have a reason to get up in the morning and make a striptease video.  I have a reason to do whatever I am going to do to the Crap Blog Detective, which I haven't thought of yet, but the possibilities are endless and I have a dragon costume, so it's probably going to be awesome.

Anyway, I am getting kicked out of the café with the free internet because they are "closing."  I think they're just jealous of my sexy dragon costume, but whatever.

P.S.  I put my video up on YouTube .  But don't worry - fame and fortune won't change me.  I mean, I have 40 views already and I'm still just as humble as ever.

P.P.S.  A little girl stuck some of her Halloween candy in my G-string last night.  It was awkward.  Especially because her parents (both of them) were watching and they totally thought I asked her to do it even though I didn't and probably never would because I am classier than that and frankly, their kid was a little creepy  and it's not my fault that sexy dragons are irresistible to children. 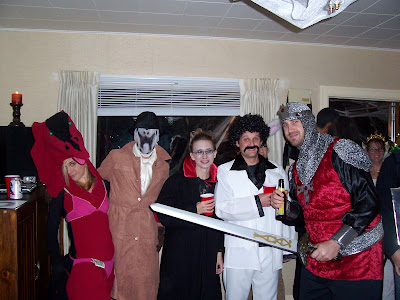 That's me and some of my new real-world friends.   I hope we can still be friends when I'm not wearing Bruce.  It might be difficult to maintain a relationship that is based completely off of my Halloween costume.  I'm not saying it would be impossible, just really complicated.  Especially if we ever wanted to go to a water park or church or a movie.