Wednesday, 6 October 2010
Facebook Twitter Telegram
Every time I write something new,  I feel like I need to make it better than whatever I wrote before it so that it never appears as though I am regressing.  Except I kind of feel like the last couple posts I wrote are pretty much the best I'm capable of - like maybe I peaked and everything else I'm ever going to do will be a disappointment.  (<-- I wroet that part sober. Now it's not so good.  Also the next part.)

So I decided that probably the best thing to do would be to get really, really, really drunk and then write about nothing until any expectations that anyone may have ever had of me are sufficiently loweered.  Then what happened was that I had some little bottles of rum that I got out of a piñata last summer and they were lying around and then I drank them.

Here's the illustrated version of what I just said: 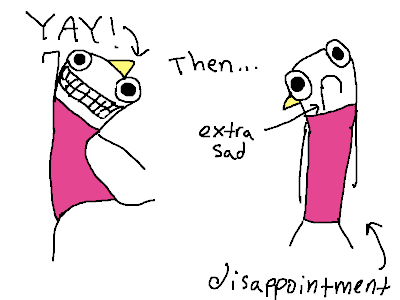 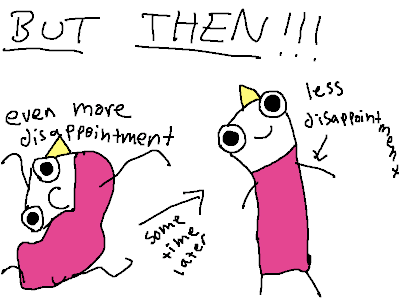 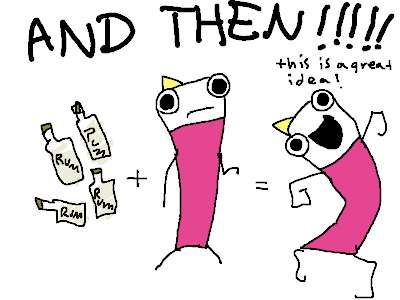 And that's pretty much what's happening right now.
(now real drunk starts) Anyway, I asked Twtter and they said I should do this live, so that's what I'm going to do.  I don't even know what I'm going to talk about.  Please still respect me after this, oksay?
UPDATE: So I decided to draw a graph to better represent the psycholgical predicament I'm.  This is it: 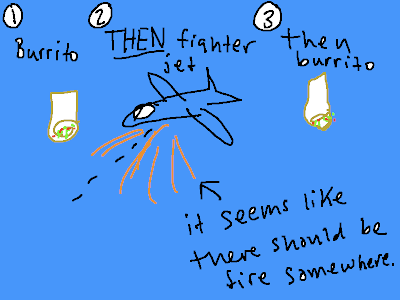 Basically, a burrito is pretty awesome.  And then you get a fighter gjet and the burrito isn't so awesome anymore because burritos can't fly in the air and kill things from a great distance.
So my reasoning goes that if I write a post when I'm really drunk, it will be like this: 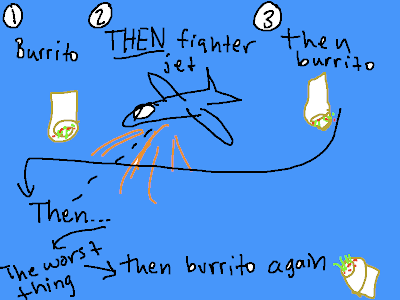 UPDATE: I meant to finish that off by saying that the burrito would then seem more awesome compared to whatever the worst thing ever was.  Maybe a rock.  Like a really, really shitty rock.  LIke a rock made out of styrofoam.
UPDATE:  I jsut realized that I might be setting a  bad example for my younger readers.  Kids, this isn't a good idea.  I made this for you to prove it: 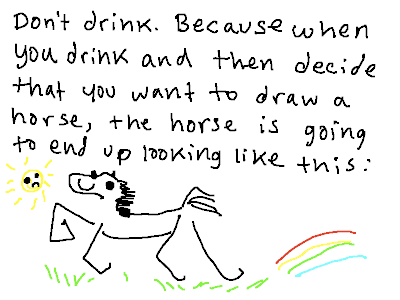 I am ashamed of that horse.  If I wasn't drunk, I could draw a horse that was at least a thousand times better.  I'm preactically an expert at drawing horses, so I should know.  When I was a kid, I used to draw horses, like, every single day.
UPDATE: I promise i'm actually really good at drawing hoerses.  I just drew this horse and I didn't even try: 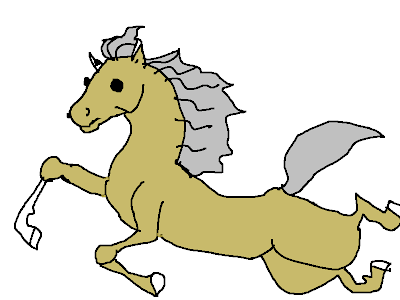 It's a palomino and it's jumping!
UPDATE:  And this is the reason that posts like this have to happen:

Does this person really think that saying that is going to make me go "Oh, okay.  Sorry about the delay in quality material.  I was just messing with you.  I'll get right back to making everything exactly up to your specifications."
Sorry dude.  I can't live up to your expectations all of the time.  Sometimes I'm going drink six miniature bottles of rum and then draw horses.  That's just the way the world works.
Anyway, guy, I drew you a picture: 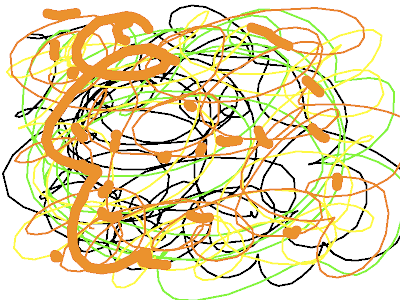 It's mostly scribbles with a few dots.  I felt like that you needed to have your expectations lowered.  I thought about adding some blue, but then I thought "fuck that guy.  He doesn't deserve blue. I'm not putting any in there."
UPDATE: But then I made a drawing with a whole lot of blue for the rest of you.  Just for contrast. 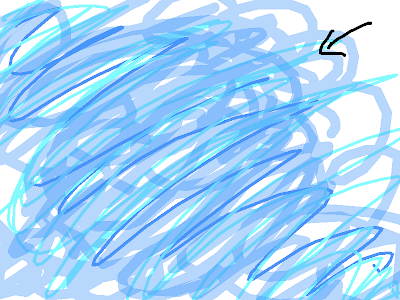 UPDTAE: So I'm sitll really conceredned about the example Im' setign. That was s lot of typos, but I think I'm going to leave it because it's honest.  I'll try to edit the next part to the best of my ability.  Which is not much ability. Anyway, I made another drawing to show why drinking is bad: 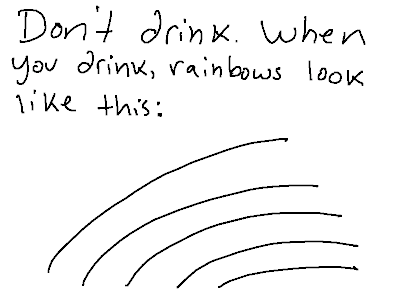 There's no possible way to interpert that positively.
UPDATE:  WAit.  I found a way. 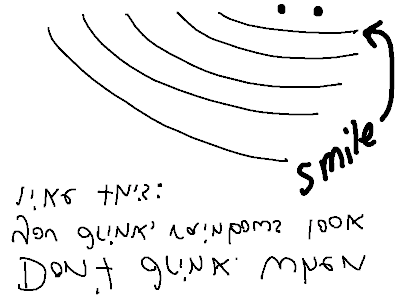 But you still shouldn't drink.  Because even though the upside-down, colorless ranbow can turn into a smiley face, it still has five double chins.  So that's like, ten chins.  Watch out.
UPDATE:  There's a weird point after you've been drinking for a wihle where things start to turn and get weird. After a few hours of drinking, you feel all great and giddy: 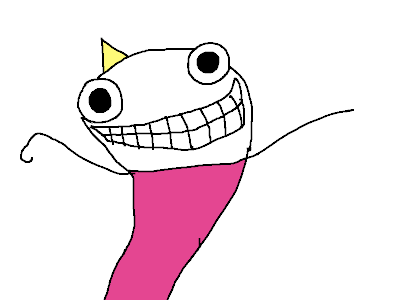 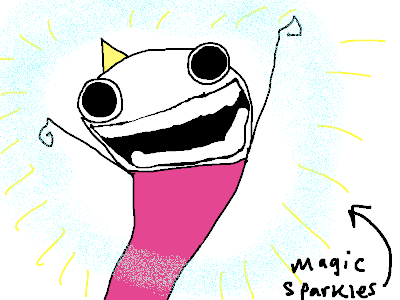 And then there's a turning point. 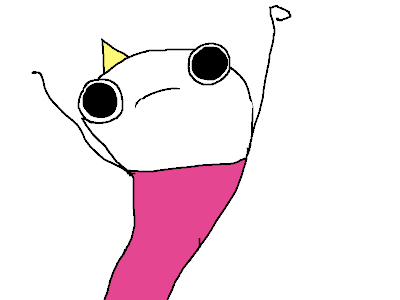 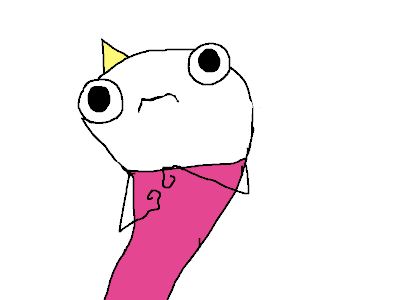 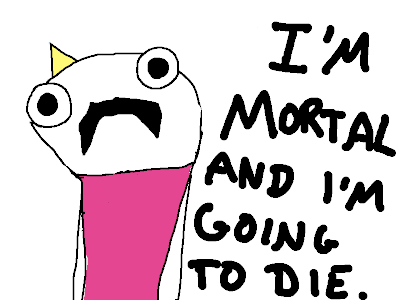 And pretty soon you start contemplating your mortality and the mortality of everything  and there's a creeping feeling that you and everything you know and love is going to die.
I think I've almsot reached that point.  I should probably either drink more, go to bed or eat something really awesome.
UPDATE: Guess what?
I MADE MORE BLUE FOR YOU!!! 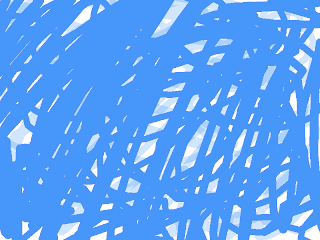 And I ate a pita shell.  I feel better.
UPDATE:  It is now morning and I feel like maybe I accomplished the opposite of what I was trying to accomplish because now I feel even more pressure to perform to make up for this monstrosity.  Anyway, I won't delete this rambling testament to my psychological shortcomings, but I think I'm going to move it down the page a little.  Maybe a few posts back, so it's just buried enough to give me a little peace of mind.
Facebook Twitter Telegram