Tuesday, 14 September 2010
Facebook Twitter Telegram
At some point during my childhood, my mother made the mistake of taking me to see an orthodontist.  It was discovered that I had a rogue tooth that was growing sideways. 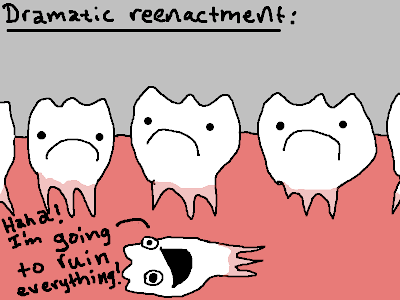 My mom and I were told that the tooth, if left unchecked, would completely ruin everything in my life and turn me into a horrible, horrible mutant. 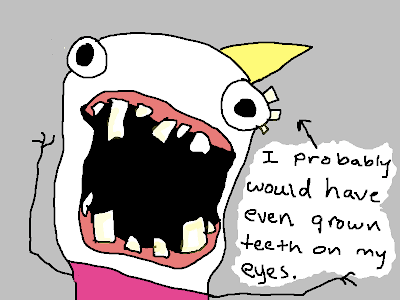 Unless I wanted to spend the rest of my natural life chained in a windowless shed to avoid traumatizing the other citizens, I was going to need surgery to remove the tooth.
I was accepting of the idea until I found out that my surgery was scheduled on the same day as my friend's birthday party.  My surgery was in the morning and the birthday party wasn't until the late afternoon, but my mom told me that I still probably wouldn't be able to go because I'd need time to recover from my surgery.  I asked her if I could go to the party if I was feeling okay.  She said yes, but told me that I probably wouldn't be feeling well and to try not to get my hopes up.
But it was too late. I knew that if I could trick my mom into believing that I was feeling okay after my surgery, she'd let me go to my friend's birthday party.  All I had to do was find a way to prove that I was completely recovered and ready to party.  I began to gather very specific information about the kinds of things that would convince my mom that the surgery had absolutely no effect on me. 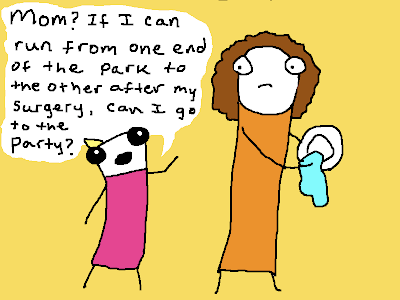 I'm pretty sure my mom was just placating me so that I'd leave her alone, but somehow it was determined that the act of running across a park would indeed prove that I was recovered enough to attend the party.  And I became completely fixated on that little ray of hope.
I remember sitting in the operating room right before going under, coaching myself for the ten-thousandth time on my post-surgery plan: immediately after regaining even the slightest bit of consciousness, I was going to make my mom drive me to a park and I was going to run across it like a gazelle on steroids. 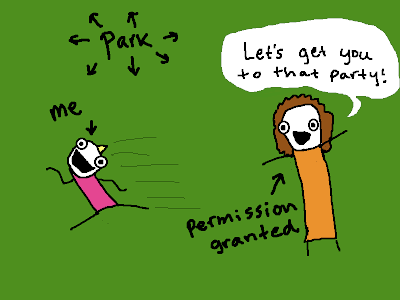 And then she would let me go to the party.
I must have done a really good job pretending to be okay even while I was still unconscious, because I was released well before the anesthesia wore off.  My mom had to hold on to the back of my shirt to prevent me from falling over while we walked out of the hospital.
I first started to regain consciousness while we were driving on the freeway. I didn't know what was going on, but somewhere in the back of my mind, I remembered that I needed to do something important.

THE PARK!!  I didn't recall exactly why I needed to go to the park, but I had spent so much time drilling the concept into my head that even in my haze of near-unconsciousness, I knew that getting myself to a park was of utmost importance.   I tried to communicate this to my mom, but the combination of facial numbness and extreme sedation caused me to be unable to form words properly.

I yelled louder and more urgently, but my mom still couldn't grasp what it was I wanted.

It was at this point that I decided to open the car door and walk to the park by my damn self.  The only problem was that instead of being stopped safely near a park, we were hurtling down I-90 at 70 miles per hour. 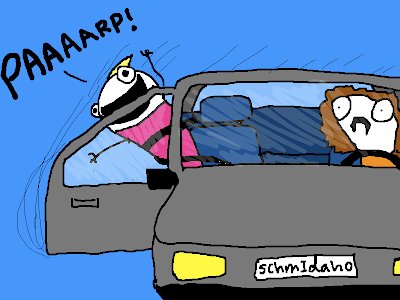 Luckily I hadn't had the presence of mind to unbuckle my seatbelt, so instead of toppling to a bloody death, I merely hung out the side of the car and flailed around ineffectively.
A little shaken up by the incident, my mom decided that it would probably be a good idea to pull off at the next exit and get some food in me.  We found a Jack in the Box and she led me inside. 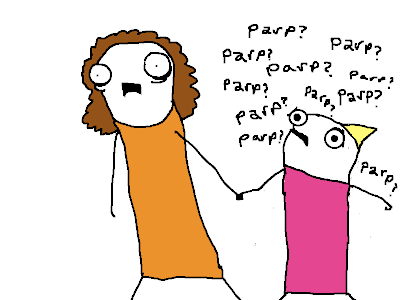 It was pretty crowded, but my mom didn't want to get back in the car, so we found a table and she told me to wait while she stood in line to order our food. 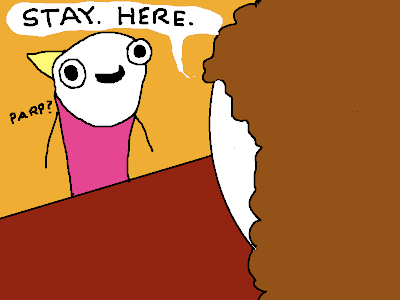 I sat contentedly at our table for a few minutes. 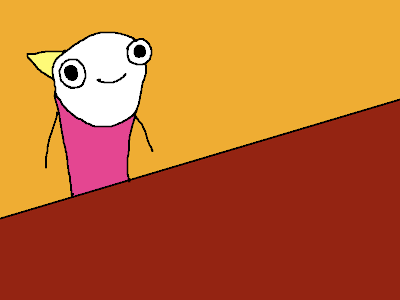 But then I forgot what was happening and panicked. 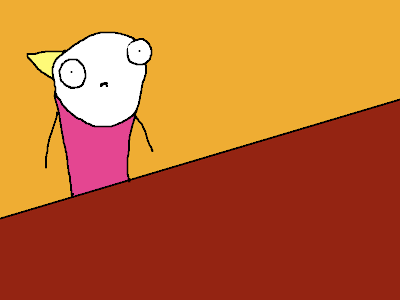 I had to find my mom.  I had to tell her about the park.  I tried to call for her, but I still couldn't quite remember how to say words. 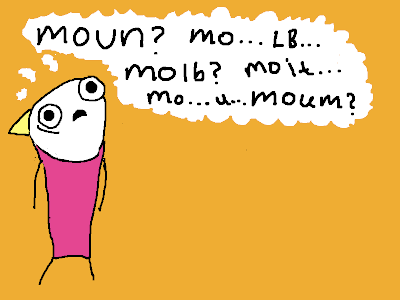 I began stumbling around the restaurant, shouting the closest approximation to the word "mom" that I could come up with. 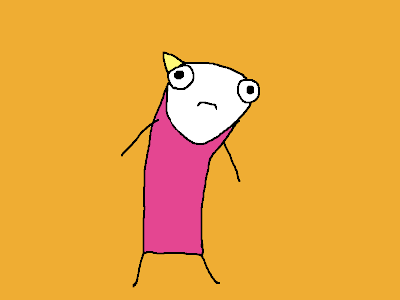 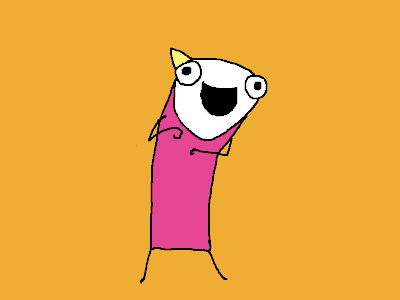 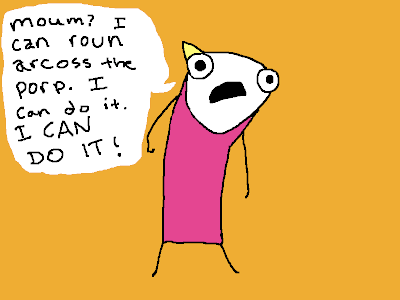 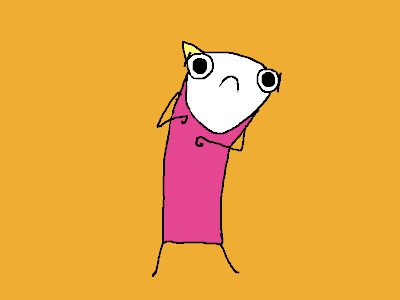 My mom hadn't yet figured out what I was trying to tell her, but she knew that I was yelling and stumbling into the other patrons and generally causing a scene, so she firmly told me to go back to my seat.
I had remembered why I wanted to go to the park, so I obeyed my mom, thinking it would increase my chances of going to the park, thus increasing my chances of going to the party.
When my mom returned to our table with our food, some version of the following conversation ensued:
Me:  Carn we go to the parp now?
My mom:  The park?  Is that what you want?
Me:  Yes!  The parp!
My mom:  No.  Eat your food.
Me:  But moun - I can roun arcoss the porp.  I can do it!  I can go to the partney!
My mom:  No you can't.
Me:  I can!  I can!  I CAN!!!
My mom:  Look at you.  You can't even walk. You can't form a coherent sentence.
Me:  I CAN ROUN ARCOSS THE PARP!!! I CAN GO TO THE PARPY!!!
My mom:  You are not going to that party.
Me:  NO!! NO! NO MOUM!  I CAN DO IT!  I CAN GO!
My mom:  I said you can't go to the party.  Now eat your food.
Me:  MOOOOOOOUUUUUMM! WHY? WHY ARE YOU SO MEEEAAAAAAANNN?? WHY ARE YOU SO MEEEEEEEAAAAAAN TOOO MEEEEEE???
My mom:  Stop it.
And then I started to cry big blubbery tears into my milkshake.  It was at that point that my mom noticed all the people glaring at her and realized that, from an outside perspective, it appeared as though she was not only refusing to let her poor, mentally disabled daughter go to a park and/or a birthday party, but was also taunting her child about her disability. 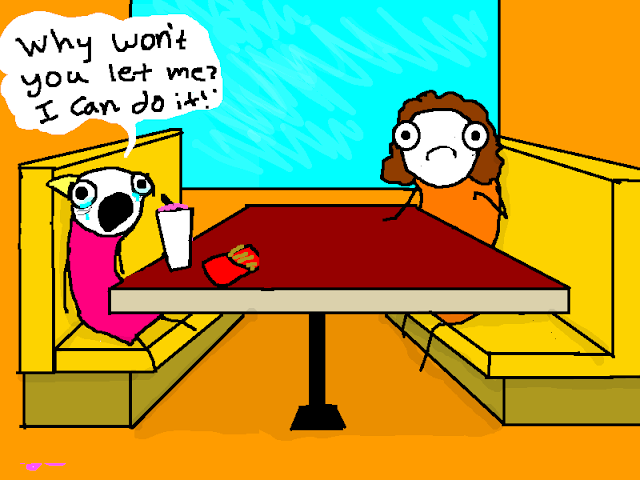 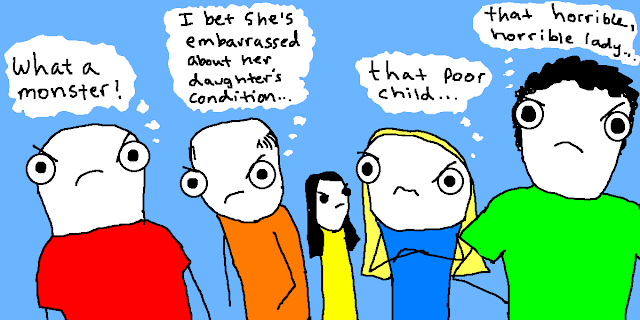 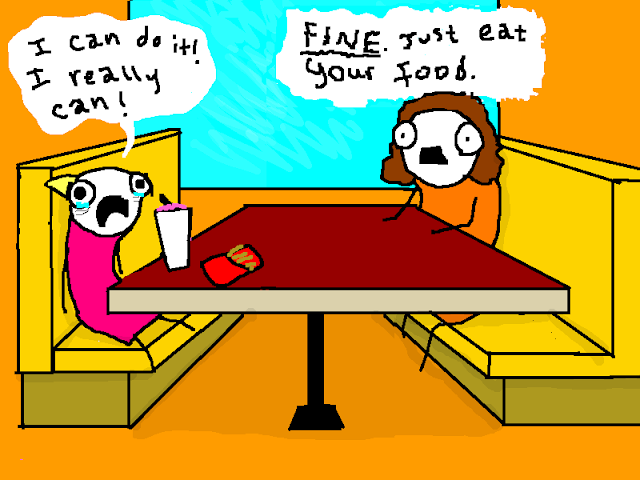 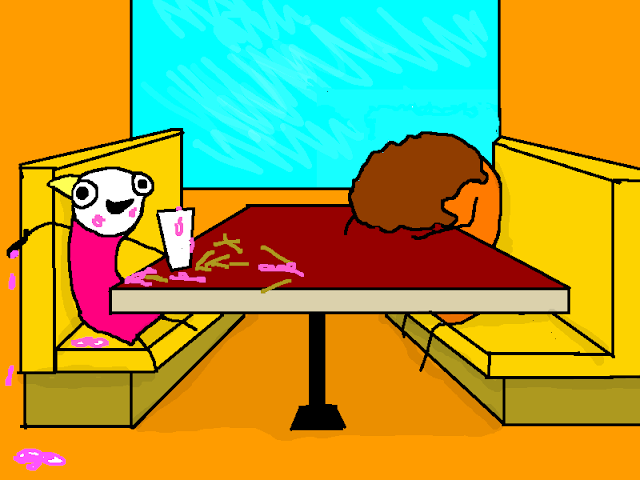 And that's how I got to go to a birthday party while very heavily sedated.
Facebook Twitter Telegram