Tuesday, 5 January 2010
Facebook Twitter Telegram
I haven't written in a few days.  I was trying to be sneaky about it, but you may have noticed.

I recently made the "decision" to stop taking my ADHD medication.  I put "decision" in quotes because it wasn't so much a choice as a default consequence of not being mentally capable of going through the necessary steps to renew my prescription.

Anyway, when I first stopped taking my medication, my inattentiveness returned quickly.  I had trouble focusing, I forgot simple things like not putting metal in the microwave.  Going to the grocery store turned into a monumental effort for me.  But all of that is okay because I don't have a job and my microwave was probably about to break anyway.

The last few days, though, have been interesting.  When you stop taking an amphetamine-based medication, you feel a little tired.   This lasts for a month or so.  But once the tiredness goes away, you realize that you are indeed hyperactive.  You may have thought you were hyperactive before.  You may have even made an analogy involving a flame-thrower in an attempt to describe your alleged hyperactivity.  But you were wrong.  You had no idea what real hyperactivity is like until now.

I am normally a pretty energetic person.  If it were not for my tendency to avoid responsibility, I would be able to accomplish my daily tasks effortlessly with enough time left over to start an AIDS charity.  However, I have recently discovered that being energetic is not the same as being hyperactive.   No.  Being energetic is pleasant.  "Energetic" is a quality that you would list on a resume.   Hyperactivity is like being forcibly injected with way too much crack-cocaine and then being tied down to a table and made to watch a documentary about sea snails. 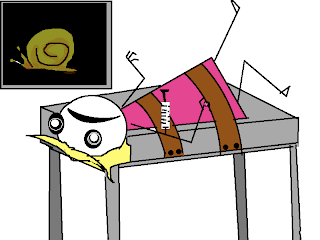 And that's when I'm actually doing stuff.  When I'm bored, it's more like being forcibly injected with way too much crack-cocaine, being tied down to a table and made to watch a documentary about sea snails, then someone reduces the rate of narrative in your stupid snail documentary and you're like "Hey!  I was watching that!" and you get kind of desperate because even though you do not have any interest in snails whatsoever, you never realized how good you had it when the documentary was playing at normal speed and now you want it back.  And then someone karate chops you in the face for no reason and you get all agitated but you can't chase after them and inflict justice because you are tied to a fucking chair.

But I could be given a tranquilizer, chained to a high speed treadmill and made to watch 2 Fast 2 Furious on fast forward, and I would still feel slightly under-stimulated.

Combine this with a complete inability to accomplish anything and you find yourself sitting on your couch, drinking coffee mixed with vodka because you forgot to buy milk, staring at the wall with intensity, thinking about how you are going to start volunteering in an emergency room because that sounds exciting and it probably involves way less responsibility than a real job except that you are wrong and have grossly underestimated the responsibility inherent in assisting with a crisis and therefore you probably shouldn't be volunteering in an emergency room, but it doesn't really matter because there would almost definitely be paperwork involved and you wouldn't be able get past that step anyway.

Sweet baby Jesus, I need to get rich and famous really soon so I can afford to go to monster truck rallies.  Either that or develop some sort of substance abuse problem that's not life-threatening, but still bad enough to be entertaining, deserving of pity and challenging to overcome.  Then I can go on an inspirational-speaking tour and write a best-selling self-help book and become rich and famous that way.  I don't see how there could be anything wrong with that plan.  I'm pretty much guaranteed to achieve my goals and I'm actually kind of mad that I didn't think of it sooner.

I don't really know where I was going with all of this.  It is probably best to stop now.