Yet Another Good Example of Why I Shouldn't Blog at 2:30 in the Morning

Wednesday, 9 December 2009
Facebook Twitter Telegram
Boyfriend and I watched a movie tonight and the movie had Michael Cera in it.  During the movie, Boyfriend said "You totally have a crush on Michael Cera..." and I was like "Yeah."

Boyfriend:  "On a scale of one to ten, how much do you love me?"

Boyfriend:  "On a scale of one to ten, how much do you love Michael Cera?"

Boyfriend:  "I wouldn't take you very seriously because you can't even say it with a straight face."

Anyway, I have found that matters of the heart are best solved with statistics.  If I truly hope to figure out whether I like Boyfriend or Michael Cera better, I'm going to have to crunch some numbers. 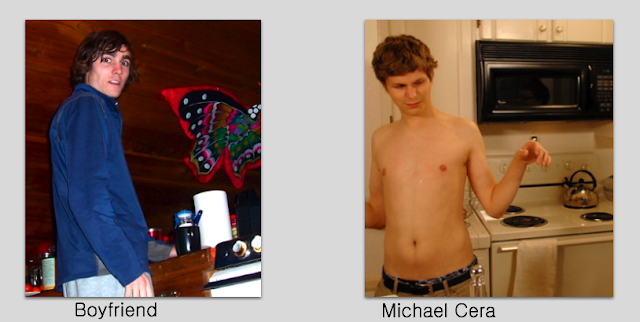 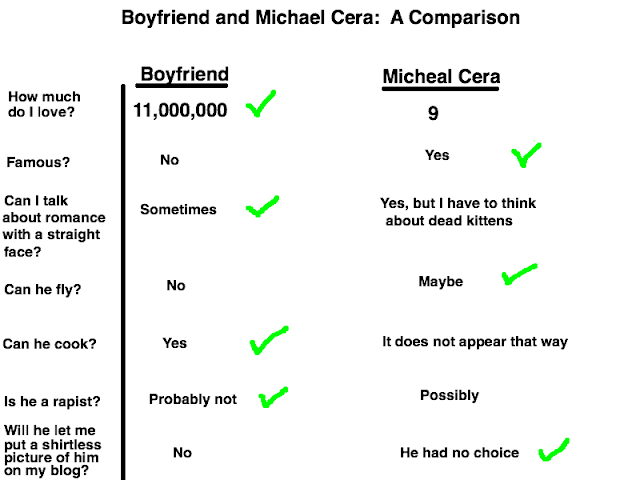 After careful analysis, it looks like Boyfriend wins 4 to 3.   Unless he turns out to be a rapist.  But if Boyfriend and Michael Cera both turn out to be rapists, Boyfriend still wins.
Figure 2: 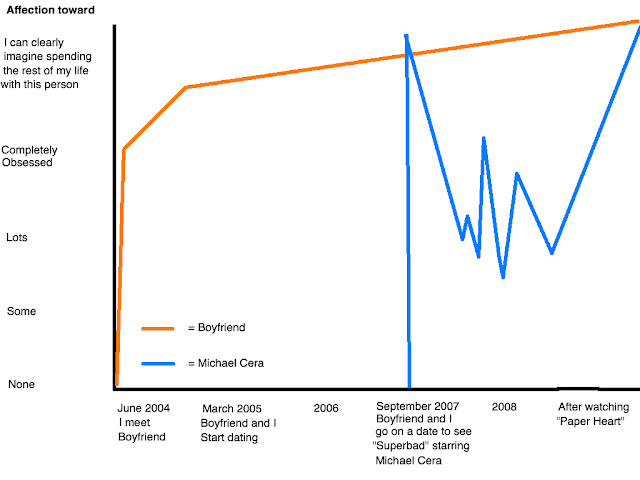 It still appears that Boyfriend has a slight lead over Michael Cera and the trend would indicate that my affection for Boyfriend will continue to stay high while my affection for Michael Cera is mostly dependent on whether or not I've recently seen a movie that he was in.
But how do Boyfriend and Micheal Cera fair when compared to all of the other things I love?
Figure 3: 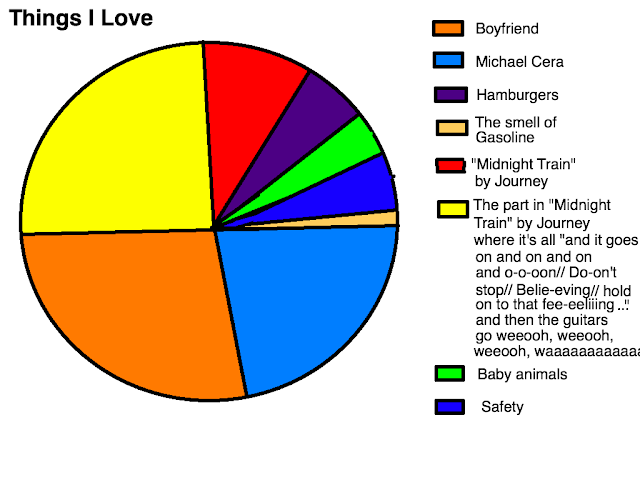 It still appears that Boyfriend beats Micheal Cera by a slim margin and he beats that one part in "Midnight Train" by an even slimmer margin.  In fact, the chart would indicate that when "Midnight Train" is combined with my favorite part of "Midnight Train," the resulting section takes up over 35% of  my capacity for love.
Well, I'm going to try to go to bed because being nocturnal doesn't appear to be good for my blog.  Also, Boyfriend went to bed about an hour ago and he was like "I'm going to bed."  And then I was like "I'm going to google Michael Cera" and Boyfriend was like "I doubt Michael Cera will protect you from the orcs in the meth-cellar..." which is probably true.
P.S.  Okay FINE, Technorati, here are your precious numbers:  TJ3VMN5RS9YE
Facebook Twitter Telegram