I got absurdly excited about it.  I was like "Ohmigoditssnowingletsgoforawalkrightnow!!!!" And Boyfriend was like "It's 12:30 AM..." and I was like "So?  We need to go to the grocery store anyway." And then Boyfriend looked at me like he just caught me eating eating paste off of the floor and there was this tense little moment like that time in first grade when a little Mexican boy joined your class and you were like "Hi!" and he said "Hola! Hoy es Miercoles!" and you were like "oh shit... what do I do?  I'm only six!  I am not prepared for this!"and then you realize that you and this person are desk-buddies because he can't speak English and you can't write R's and suddenly you are forced to find a way to communicate through crude hand-gestures and grunting noises and pretty soon you've invented an entirely new language and you still can't make R's and Paco still can't speak English but it's okay because you understand one another and that's all that matters.

My point is that after staring at me in silence for a few long moments in which I am sure he questioned some of his life decisions, Boyfriend was like "Fine."

So Boyfriend got all bundled up while I checked to make sure everything was unplugged because I didn't want the house to catch on fire while we were gone and then I got dressed while Boyfriend sat on the couch in his snow-clothes looking like he was on some sort of detonation timer and if the timer went off we would no longer be allowed to go for a walk, so I put my hat and gloves on really fast and then I was like "I'm ready!" and Boyfriend sighed and heaved himself off of the couch and we walked outside and there was already like, three inches of snow on the ground!

Boyfriend wanted to stop and take pictures of the snow and the pretty lights, but I was so excited that I took off running: 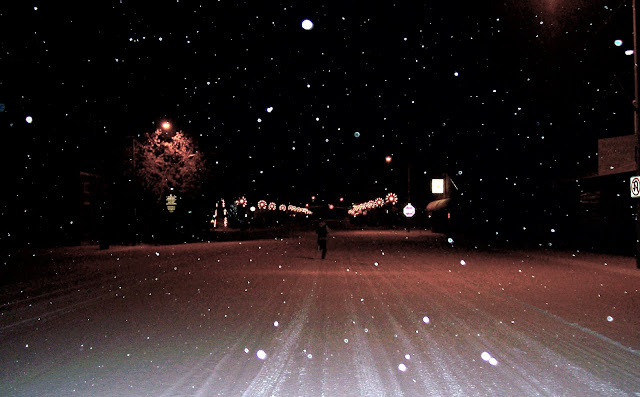 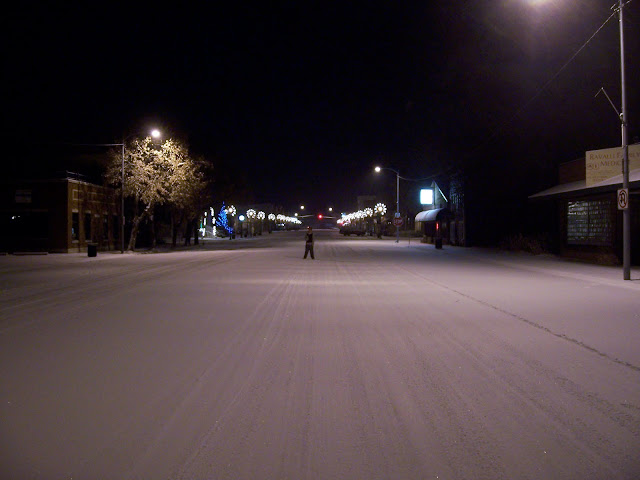 And then I stopped because I had a really good idea and I yelled "Hey! You should take a picture of me so I can put it on my blog!"  And Boyfriend yelled back "Yeah, I already kind of did that because you ran into the frame."  And then I was like "Well, you should take another one because I wasn't looking at the camera."  And then boyfriend sighed and I could actually hear it from that far away.  I guess it was more of an anguished grunt.

Anyway, that's Main Street in downtown Hamilton, MT on a Saturday night.  It's pretty much just like Las Vegas except with fewer fountains.

We got to the grocery store, and guess what? 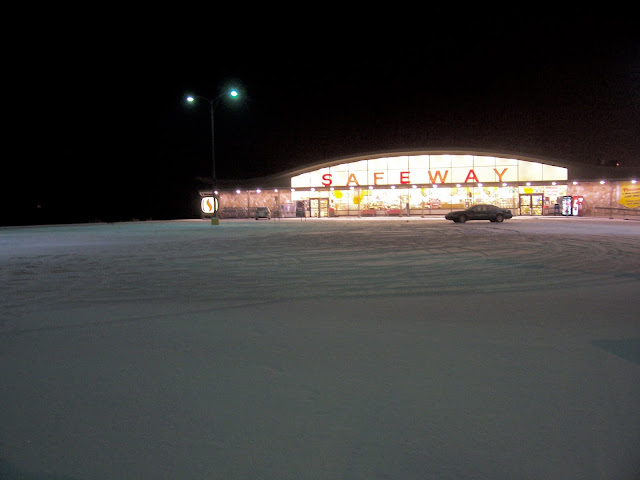 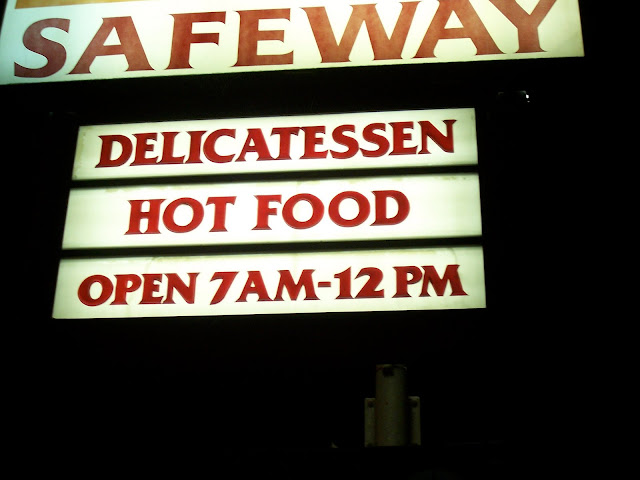 Not open.
Someone should tell them that it probably isn't good business to close at noon because they'll miss the dinner rush.
Boyfriend said "Well, what should we do?"  And I was like "We could go to Super One..." and Boyfriend said "Super One is like nine miles away" but really it's only one and a half miles away and I told him that and he made that same tortured grunting noise but I think he was secretly excited about walking all the way to Super One because who wouldn't be?
When you live in a town this small, late-night walks are a pretty surreal experience.  It wouldn't have been hard to pretend that we were the only two people left in the world: 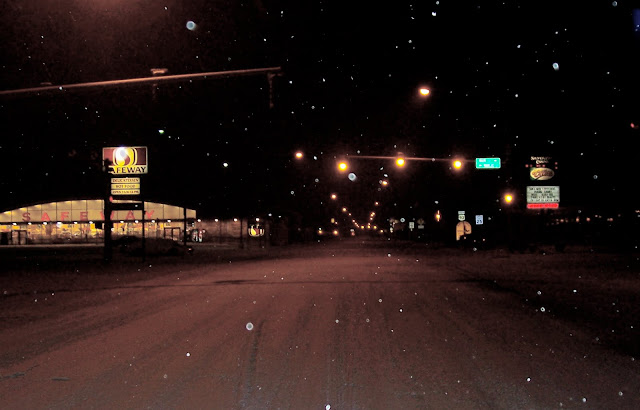 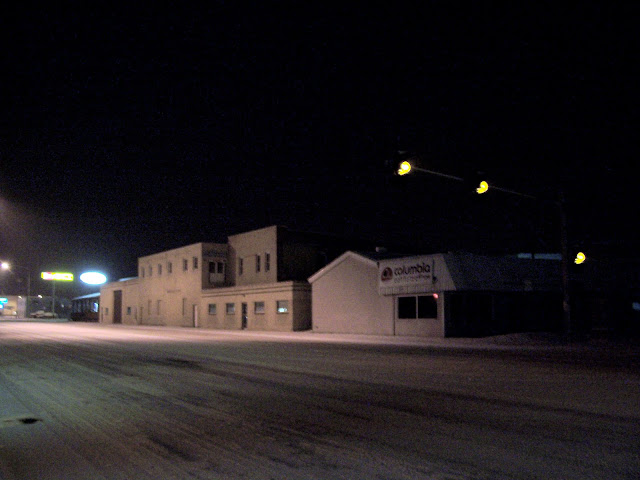 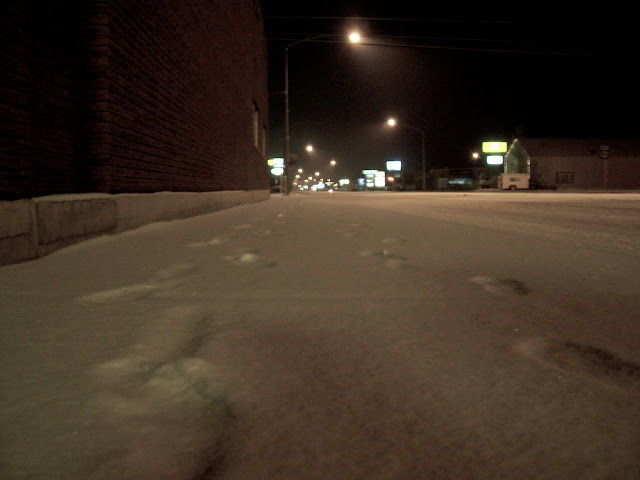 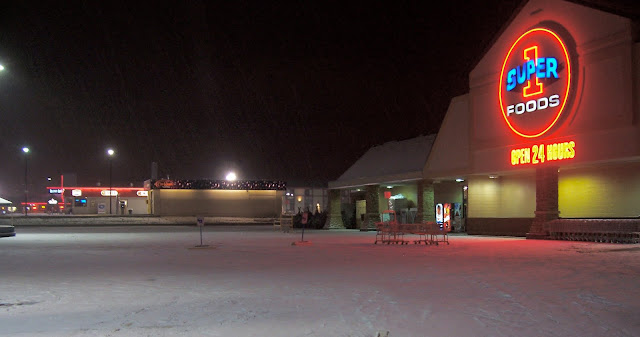 We finally arrived at Super One.  Even the inside of the grocery store felt like it was part of an alternate universe: 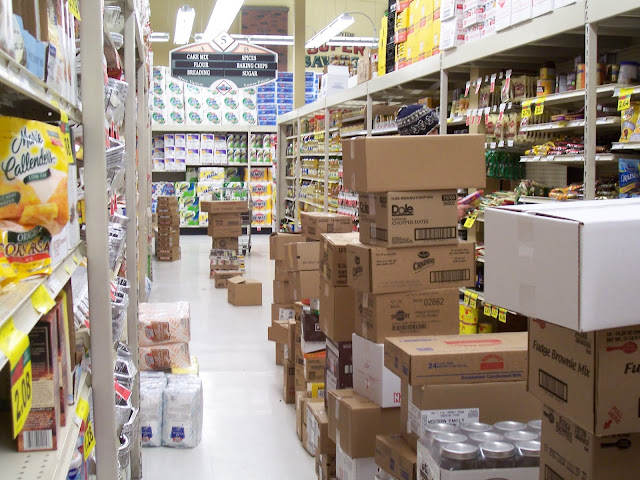 And there was some guy in that alternate universe who had the unfortunate job of stocking shelves at 2:00 AM but nevertheless he took his job really seriously and prepared for his shift like a fucking champion: 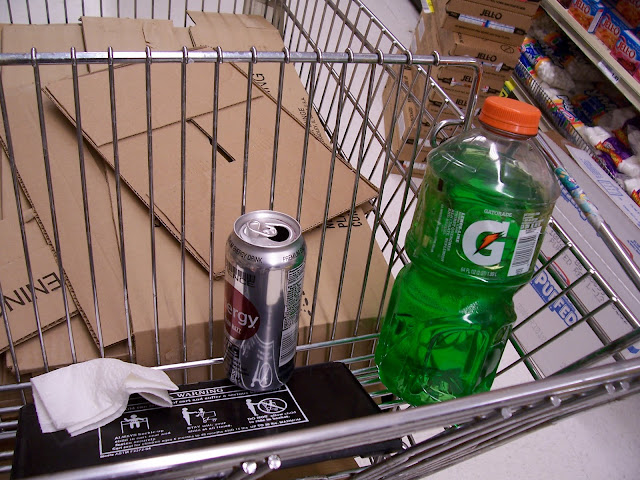 ... with an energy drink and 64-ounces of gatorade.
I saw the guy wandering around in the store.  He looked like Gollum.  He was a creature of the night, dressed all in black save for the red "Anarchy" symbol that was safety-pinned to the back of his ratty T-shirt.  Unlike Gollum, this man was fucking purposeful.  He walked like you'd walk if you had just found out that your hot wife was giving birth to twin eagles but before you could go to her side, you had to save the earth from aliens and then the camera panned out and you started walking in slow motion to some Rage Against the Machine song and then you turned into Will Smith and you fucking brought it   and the aliens were like "daaaaaayumm, we should never have attacked Earth... our bad." And then you turned into William Wallace for a second and yelled "FREEEDOM!!!!!!!!" and then you turned back into Will Smith, only this time you were also part Samuel L. Jackson and you pumped some alien ass full of lead because that's what you were born to do.
That's how this guy walked.  Only more than that.
I felt reassured that if I actually was one of the only people left on Earth, this guy would be able to protect my ass from ALL the shit.
Boyfriend and I made our purchase (yogurt, an economy-sized box of candy canes, almond bark, Craisins and justice) and began the return trip.
Somewhere along the way, we came across a parking lot that was covered in completely undisturbed snow.  This is what Boyfriend did: 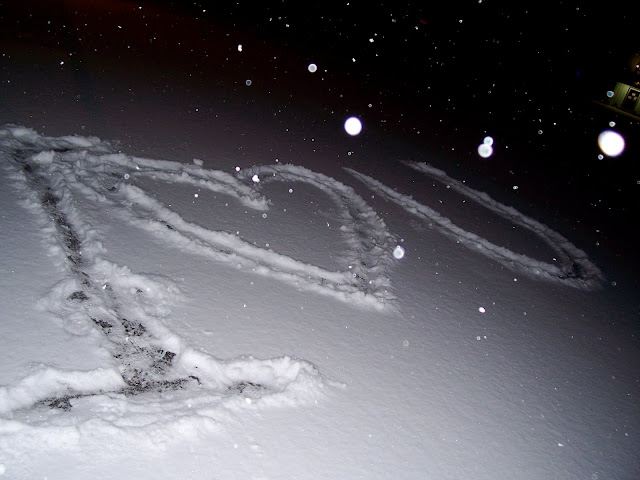 And this is what I did: 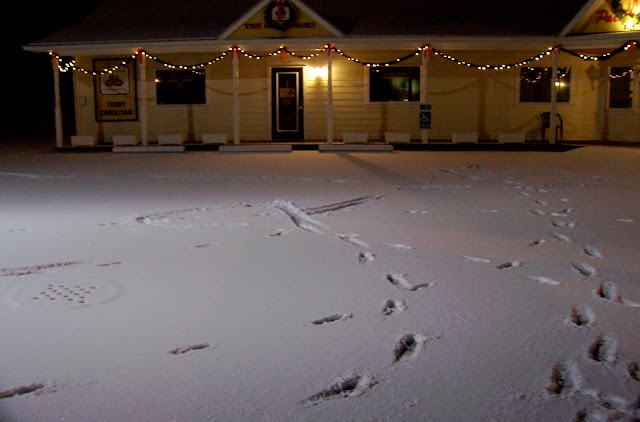 Don't try to read that.  It doesn't say anything because it's just random running.
Boyfriend was like "Hey Allie!  Look what I made for you!"  I looked at what Boyfriend made and then I glanced over my shoulder at what I had made, and there was clearly an incongruity between the two.  In my head I was like "Touché, Boyfriend... you win this time.  But I will get you... I will get you."
Okay, I'm getting tired of thinking of transitions between all of these pictures because you can only say "and then we kept walking" so many times before it just sounds weird.  So I'm just going to skip over all the walking bits and show you the exciting bits without any context whatsoever.  Okay, maybe a little context.  But not enough.
This is the only Internet Service Provider in town: 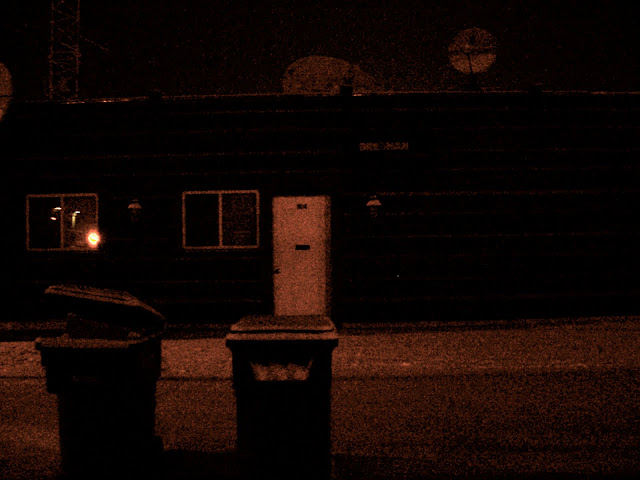 That's the front of the building.  I'm not tricking you by taking a picture from some alleyway and then saying "Oh look how ghetto and rape-y this place is!"  No.  This is the real deal.  If we look a little closer, we can see this in the window: 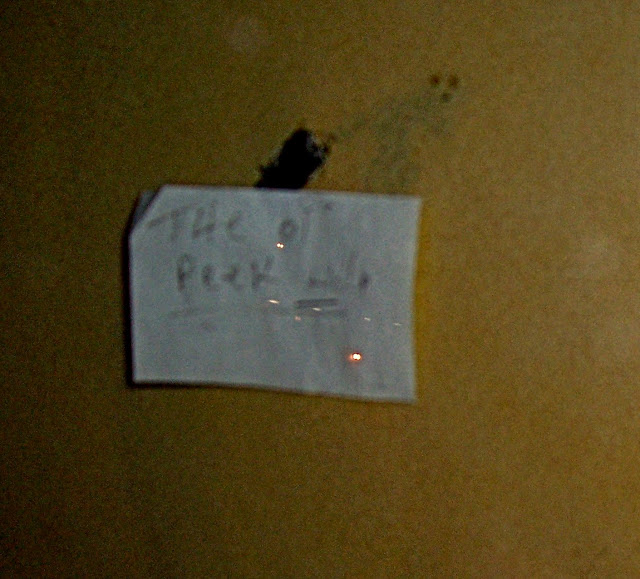 You can't see it very clearly because I had to use the flash (I'll take a picture in the daylight at some point), but it says (and I quote) "THe ol' Peek Hole!" And "Peek" is underlined once.  "Hole" is underline twice.  And yes, there is an exclamation point there.
You can see why rape may have been a legitimate concern when Boyfriend and I were getting our internet installed.
Anyway, it is probably not fashionable to end one's blog posts talking about rape, so here are a few more pictures.  Forget about the rape part. 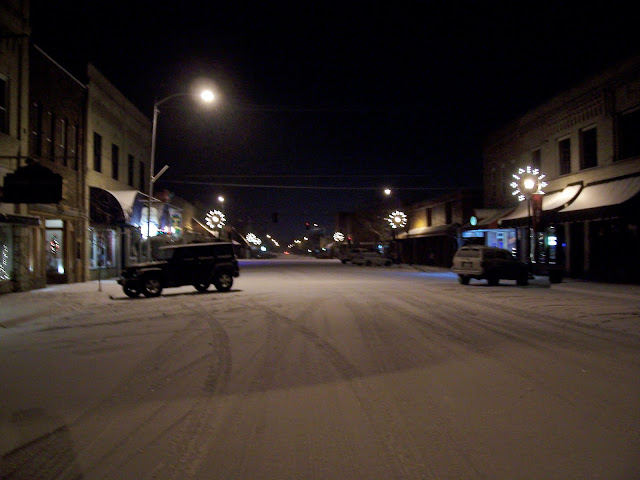 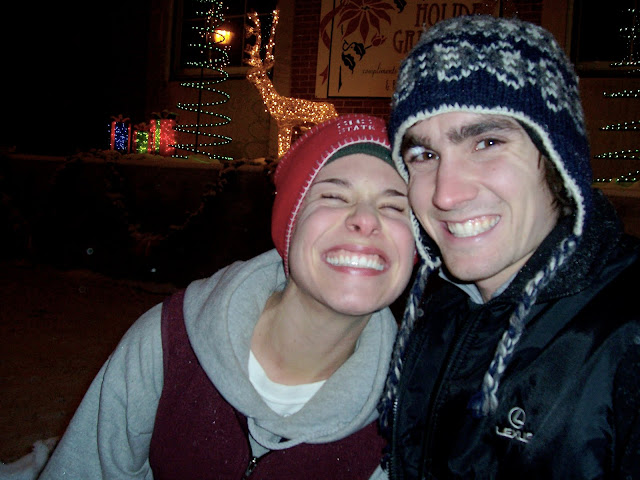 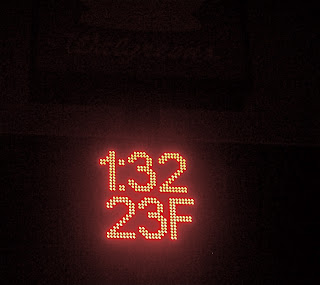 It has warmed up considerable since last week! 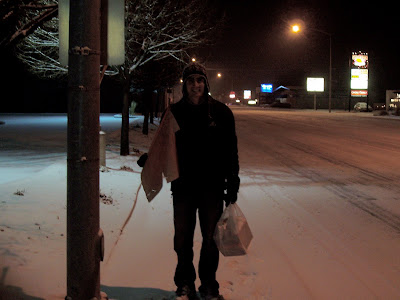 That's Boyfriend holding a crossing flag.  There aren't real crosswalks in our town.  You have to flag down traffic your damn self.
Okay.  The End.
Nevermind.  I lied.  There is one more thing.  THIS  is a clone of my blog that I test things on before editing this site.  Brian (the vigilante hero of courage and justice and now web-design too) has been helping me figure out how to solve my layout problems and it looks like he did a really good job of it.  If you were having problems viewing before, would you please visit the link and let me know if the layout Brian made looks okay on your computer?  Thank you.  And now Brian has eleven trillion points because he spent all night helping me with my blog and he even sent me cat pictures.
Now it's the end.
Facebook Twitter Telegram