Shit That's a Lot of Toys... (A Christmas Story)

Friday, 18 December 2009
Facebook Twitter Telegram
When I was young, I always looked forward to receiving the Oriental Trading Company catalog in the mail.  The Oriental Trading Company catalog was magical.  You could get 200 toys for under twenty dollars.  Yes, they would probably be tiny, rubber pieces of fruit.  Or plastic whistles shaped like pianos.  And they would probably have faces.  And the faces would look like they were painted by a thumbless epileptic with a depth-perception problem, but you could get TWO-HUNDRED of them.  OH. MY. GOD.  How awesome would it be to have 200 toys?

My mom would hand us the Halloween or Thanksgiving edition of the Oriental Trading Company catalog and ask us to circle the toys that we wanted for Christmas.  She learned early on that if she waited for the Christmas edition to come out, we wouldn't get our toys until April and she would have to buy us emergency-replacement toys from K-Mart to keep us from leveraging the injustice whenever we wanted a puppy.

I spent hours studying the Oriental Trading Company catalog's glossy pages, trying to figure out how to obtain the most toys possible.  My mind raced with the possibilities:  "If my mom has one hundred dollars and I am willing to overlook the fact that my toys will probably be an assortment of random objects with monstrously deformed faces painted onto them, I can get... let's see... ONE THOUSAND TOYS!!!" 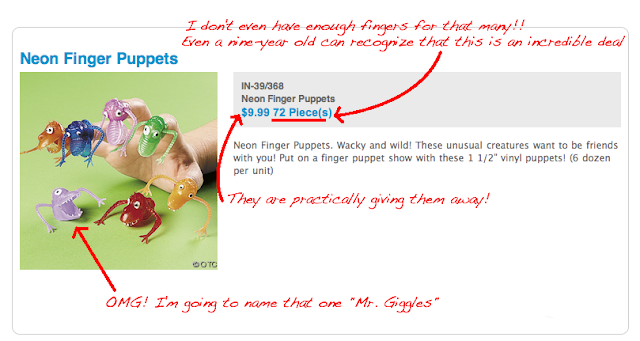 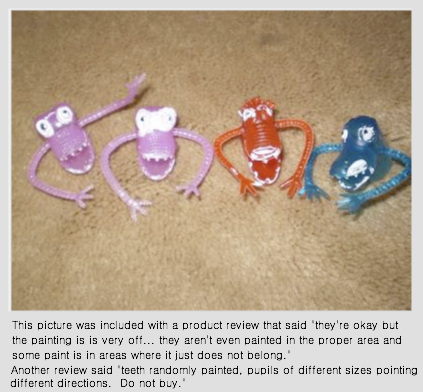 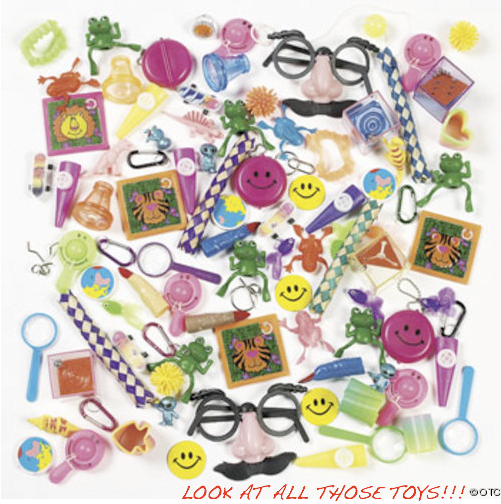 The situation became slightly more complicated when I reached the plush toy section of the catalog and noticed that I could get twelve zoo-animal puppets for twenty dollars.  I wanted the zoo animals.  I really did.  But for the same price, I could get almost ten times as many "assorted toys."  This was a weighty decision for a nine-year-old. 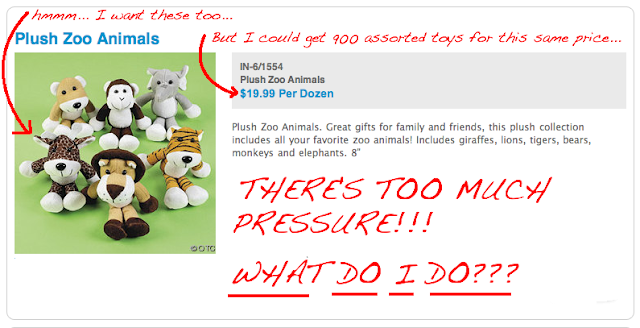 I would try to bargain with myself and work out exactly the right ratio of quality to quantity, but it is hard to argue with quantity and greed almost always won out.

On Christmas morning, I would feel so self-satisfied, knowing that I had maximized the number of presents I would get to unwrap.  I remember watching my sister unwrap the two or three expensive items that she selected from Oriental Trading Company and thinking "She's so stupid.  I'm going to get at least two-hundred times as many toys as her..."

Three days later, my sister would be playing contentedly with her super-deluxe farm animal play-set and I would be eyeing her with jealously, having run out of ideas for how to have fun with two hundred plastic banana-whistles.