I was looking through my unpublished entries this morning and I found this:

4th grade – The year I was homeschooled.  Mom had to bribe me with strawberry-orange-banana juice to get me to do my shoolwork.
Mom had a psychological breakdown over teaching me long division.  I hated long division because it looked more like dance-choreography than math and I was pretty sure that it wasn't actually real and my mom was just fucking with me for entertainment. 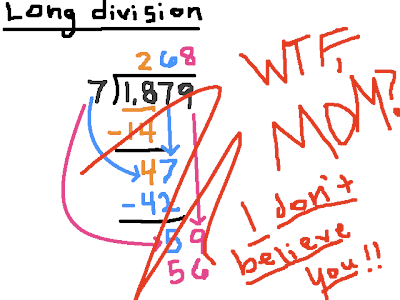 IT DOESN'T MAKE ANY SENSE!!!  Why would anyone do that with numbers?
To this day I am resentful of that stupid half-box with the little hang-y tail.  It should never have gotten involved in math.  It drastically altered my ability to take math seriously.