Monday, 28 December 2009
Facebook Twitter Telegram
Remember when I was like "I'm going to be the best blogger ever!  I'm going to post three times a day over the holidays!"
That's easy to say when you are ankle deep in a string of Rick Moranis posts and you're still filled with that Christmas optimism that says "I will be able to find the time.  Fourteen people staying in one house?  I'm staying in that house too?  Bring it on!  I'll find time to blog no matter what because I'm the awesomest blogger ever!  I'm unstoppable!  I'm like Wolverine!"
In hindsight, I can see that getting your hopes up was foolish.  I am a mortal blogger sharing a house with 14 people, several of which are small children, I've had a hangover for three days now and I'm pretty sure that I've succeeded in giving myself Type II diabetes, so that will need to be attended to as well.
What I'm trying to say is that I overestimated myself.  I'm not like Wolverine.  I'm more like that one guy whose only power is the ability to resemble a chicken.  Only I don't even have the ability to resemble a chicken.  At least not convincingly.  I mean, I can do a pretty awesome chicken impression, but I doubt I could fool anyone for even a second into believing that I am an actual chicken.
Crap.  Boyfriend just found me.  I've been hiding upstairs, huddled in the least trafficked corner of the house, trying to write as quickly as possible before I am called downstairs to eat something called a "Dutch Baby," which I am told it similar to a pancake, but I'm not buying it.  Why would it be called a Dutch Baby if there were no babies in it?  Either way, it sounds like a conspiracy to me and I'm probably going to be making my first foray into cannibalism.  Wish me luck.
Anyway, Boyfriend walked in on me blogging in my corner and it was kind of like I had been caught eating an entire cake by myself or shooting up heroin or something.   He was like "Are you blogging??"
Me:   "Yes.  And you can't stop me."
Boyfriend:  "I wasn't trying to stop you."
Me:  "Good.  Because if you did try, you would not succeed."
Boyfriend:  "What are you blogging about?"
Me:  "About how I'm like Wolverine but actually I'm not like Wolverine because I'm more like the guy who can turn into a chicken.  But I can't turn into a chicken."
Boyfriend:  "I see... so you can't turn into a chicken?"
Me:  "No.  But I can do a pretty good chicken impression."
Boyfriend:  "Prove it."
Me:  :>  (That's the emoticon for "impressively accurate chicken impression")
Boyfriend:  "If you don't put a picture of yourself doing that on your blog, I will be angry and I will stop loving you.  And I will set you on fire."
Well, he didn't actually say that last part, but that was my interpretation of what he meant when he said "You should put a picture of that on your blog."  His face is really what did all the talking.
At any rate, I don't know if it would be a good idea to try to cram my first experience of cannibalism, the realization that I am more like a chicken than Wolverine, the demise of my relationship and being set on fire all into one day... So I'm posting the chicken picture: 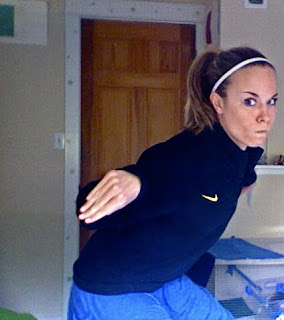 If you look really closely, you can tell I'm not actually a chicken.  I'm just pretending and it's nowhere near good enough to be considered a superpower.  Yet.
Facebook Twitter Telegram