I Could Give This Post a Snappy Title, OR I Could Just Tell You That it Contains a Picture of Me With No Pants On. You Will Probably be Terribly Disappointed.

Thursday, 3 December 2009
Facebook Twitter Telegram
Sometimes I wish I could go back in time and talk to myself as a kid and say "guess what?  You grow up to be a rapist!" just to fuck with myself because then I'd spend the rest of my life wondering "When am I going to turn into a rapist?  Is it now?  Do I rape that person?  Why do I do it?  OH GOD, I CAN'T TAKE IT!!!" And the funny part would be that I would never actually turn into a rapist and it was a trick all along!  I forget where I was going with this...

Oh yeah, I was going to talk about how I wish I could go back in time and warn myself about stuff, but then I got distracted thinking about how, if I really could go back and talk to myself in the past, the potential for practical jokes would pretty much be endless.  Like, I could tell myself that I'm on fire! Or that every time I poop, Satan stabs God in the face and God dies and it's all my fault for being so filthy.  That would really fuck me up.

Or I could actually try to be helpful and not ruin my entire life over a cruel, albeit hilarious, joke.

Some useful advice for Allie, from YOURSELF IN THE FUTURE:
Not every black and white thing is a cow - but some of them are!
Butter tastes awesome, but it tastes much less awesome when you eat a whole stick of it by itself.
Eating too much pepper doesn't undo eating too much salt because pepper is not the opposite of salt. It's
just pepper.
When you make a fist and hold out your middle finger, adults don't think that it makes your hand look like a tank.
Ants taste bad.
So do spiders.
So does poop.
When your parents say "you are going to be a big sister," they mean that your environment will be taken
over by a needy, drooling lump that looks vaguely like a person but can't even walk or hold up its own head.
Your survival depends on either exterminating or out-competing this intruder.
And no, bribing it with toys will not make it go away.
Neither will locking it outside...
... Or hiding it in the closet ...
... Or setting it on fire - setting your sister on fire will make your parents take you to see a brain doctor.
If you don't kill it quickly enough, the intruder will start to acquire abilities - like walking, making sounds, stealing your toys and engaging in an endless string of adorable activities that your parents will videotape instead of videotaping you.
When you run in front of the video camera screaming and flailing your arms - you aren't being cute - you're just being obnoxious.  Stop it.
Doing the exact same thing as the intruder doesn't work either.  Apparently, when you crawl through the dog door, it not nearly as impressive as when the other thing does it.
Making a crayon mural in the hallway is not an acceptable outlet for your frustration and your parents won't believe that your 9-month-old sister did it.
Stealing your sister's bottle will result in the discovery that breast milk doesn't taste the way you thought it would.
Not every cat is as docile and brain-dead as your cat.  If you pick up the neighbor's cat by its tail, it will bite you and you will bleed.
Bleeding = spiderman Band Aid = awesome.
This discovery will cause you to come dangerously close to becoming a self-mutilator - a future only prevented by your infinitely wise mother, who will give you a box of Band Aids to stick wherever you want "as long as you stop cutting yourself..."
Even though Vodka looks like water, it doesn't taste like it.

Similarly, your grandmother's face cream is not frosting.  Nope, still not frosting.  ARE YOU RETARDED????  It's still not fucking frosting!  It will never be frosting!  No matter how many times you check, it will always be face cream and never frosting.
On your first day of school, your mom will tell you how exciting it is going to be - then she will start crying uncontrollably.  You will be very confused.
Naked is not for school.
Naked is still not for school the next day.
If you dig a big hole in the sand and then fill it with water and submerge your naked body up to your neck, your teachers will still find you and make you put your clothes back on.  And then you will be all wet and sandy for the rest of the day on top of not being able to be naked.
The toys at school aren't supposed to go home with you - adults call that stealing.  And no matter how attached you have become to the toy, you will have to give it back and let the other kids play with it too.
Adults will tell you that sharing is fair, and even though they have no idea what they are talking about, they will enforce the notion doggedly.  Unurprisingly, it never really seems to work out in your favor.
Adults will expect you to learn how to spell your full name, but the name "Alexandra" is really long and you don't know how to make R's.  In fact, you will be the only person in your class - maybe even the world - who simply cannot figure out R's. 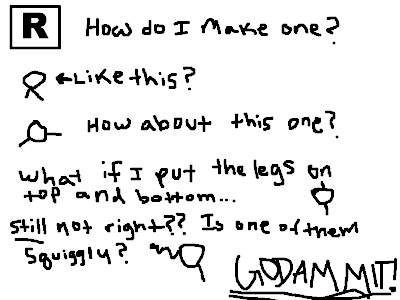 "Beaner" is not an acceptable name for a Beanie Baby - especially if your Beanie Baby is a chihuahua.
Umbrellas only make Mary Poppins fly.  They don't work for regular people.
Running really fast and flapping your arms doesn't work either.
Human beings are simply not meant to fly and hitting the ground after jumping off of a roof doesn't get any easier the second time.  Your mom will stop being even vaguely sympathetic after the third time.  In fact, your mom probably will be reasonably sure that you are retarded at that point.
When someone tells you not to touch a fence because it will electrocute you, you should take their word for it.
Never poke a llama in the face.
Everyone else in the world can ride a bike - except for you.
Sitting on the bike and letting your friend push you down a big hill will not change that - it will just make you never want to ride a bike ever again
Your father will try to assuage your fears of bike-riding by letting you sit on the cross-bar of his bike while he rides slowly and safely around your neighborhood.  Despite his best intentions, your father will hit a curb and crash his bicycle - cementing your future as a bike-fearer.
Roller skates are fucking dangerous.  They don't really have brakes even though everyone is always like "No Allie, you put your heel back like this and that's how you stop..." They are just trying to trick you.  There is not actually any way to stop roller skates.
Some people are not cut out to be good at anything involving wheels.
And that's about where I'd give up.  I would sit myself down and say "Listen, punk.  There's this thing in the world called 'Natural Selection' and I'm not so sure you're 'survival material.'"

And then my past self and my future self would get in a fight and someone would get stabbed and the winner would be like "LOOK WHO'S NOT SURVIVAL MATERIAL NOW, BITCH!"

Except for no one really wins in that situation.

And that's why I stay the fuck away from time travel. 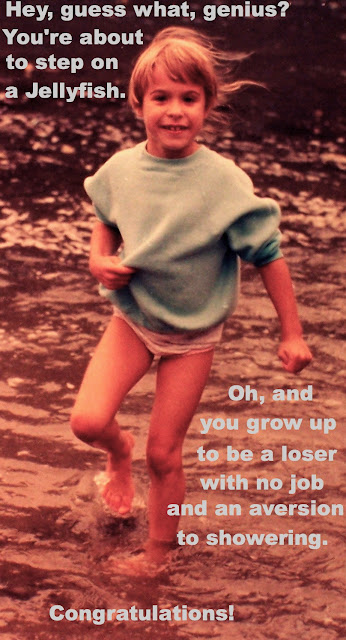