Boyfriend Would be a Headless, Dignity-less Torso Without Me and That's a Really Disturbing Title Now That it's 3:00 AM

Monday, 7 December 2009
Facebook Twitter Telegram
I may have mentioned that I am nocturnal now.  I go to bed sometime around 5:00 AM and I wake up at noon.  I do this because I am afraid of being murdered in my sleep by a fugitive or an orc. 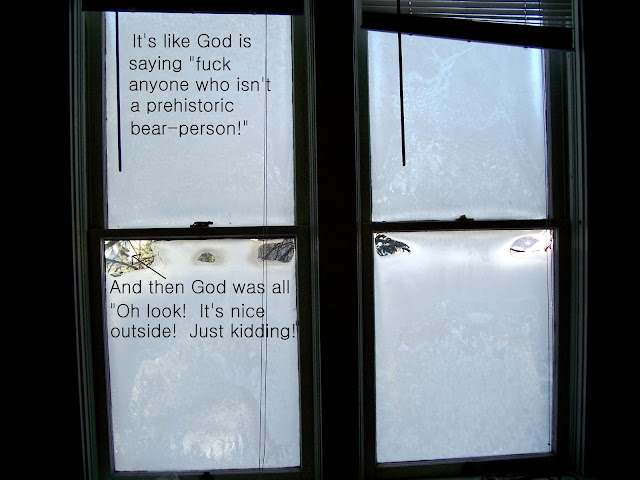 Anyway, Boyfriend and I are not prehistoric bear-people and we probably are going to die.  We have been confined to our living room for three days now because it is the only room in the house that is warm enough for survival.

We covered all the doorways with another layer of quilts and wool blankets and we drew the blinds to block out a little bit of the cold that radiates from the window panes.  Then we set up camp on the living room floor, rented all three Lord of the Rings DVD's and fought over who got to sit on the electric heating pad.  I won because I'm a fucking survivor. 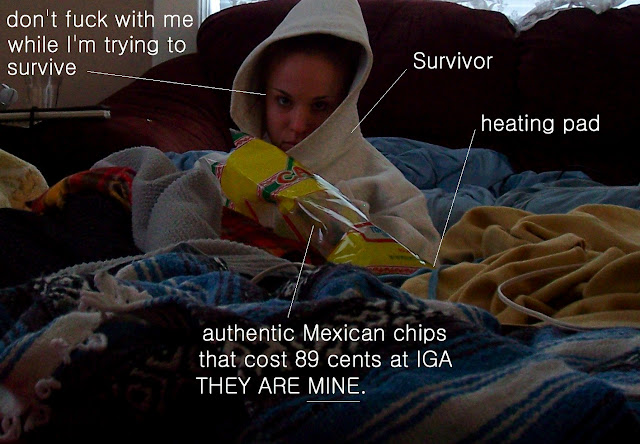 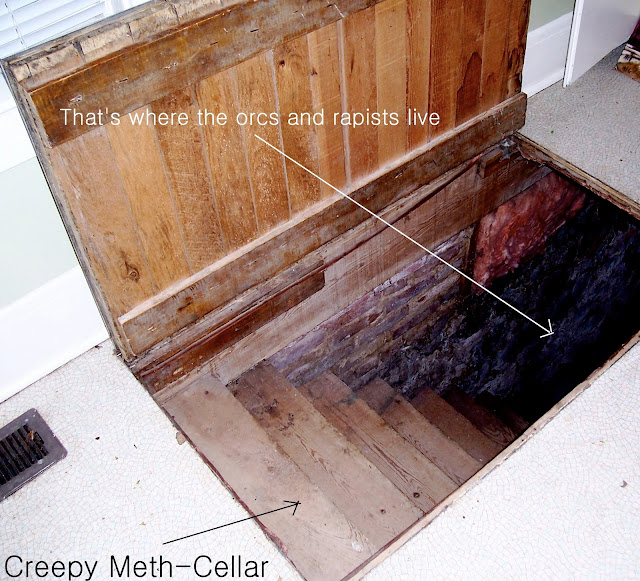 I kept quiet until around 1:00 AM.  That was about when we finished the Lord of the Rings DVD's and then I started thinking "Shit.  What if orcs are real?  There's probably one in the meth-cellar right now..." and at first I was just like "pshh, don't be silly..." but the more I thought about it the more legitimate it seemed and pretty soon I was almost positive that there was either an orc or a rapist or possibly an orc-rapist laying in wait in the darkness under my kitchen floor and I said "We should go upstairs..." because I really, really wanted to be in my panic room but Boyfriend didn't respond because he was already asleep and that made me feel even more alone and terrified of whatever was in the meth-cellar, so I tried to wake him up by jabbing him in the ribs but he just made a little sputtering noise and rolled over.  I kept trying.

Boyfriend:  "Hszzmmuh? What are they?"

Boyfriend:  "What should we call them?"

Boyfriend: (Silence punctuated only by a creepy smile)

Me: "What are you talking about?"

Me: "Then what were you talking about?"

Me: "You are definitely asleep."

At this point Boyfriend tried to look at me to prove that he was awake but he wasn't actually awake and his eyes were kind of rolled back in his head and he was smiling like Jack Nicholson in "The Shining" and it just made me want to be in my safe room even more so I said "WAKE UP!!!" and it came out way louder than I expected because I was starting to panic and then Boyfriend actually did wake up and he started to panic because I was panicking and he was like "What??  What's going on?  Are you okay?" And I was like "I want to go to bed!"  and Boyfriend said that we were already in bed but then I told him about how I changed my mind and I didn't want to sleep in the living room anymore because it was too close to the meth-cellar and Boyfriend said "well, we definitely aren't going to sleep upstairs" because Boyfriend is a huge vagina and he can't sleep when he's "shivering and probably almost dead." 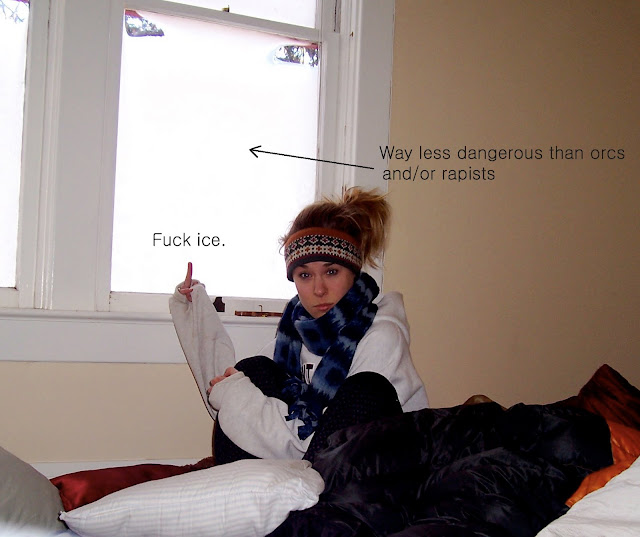 I definitely didn't want to be locked in my panic room all by myself, so I decided that I was going to try sleeping in the living room but that didn't work and I just ended up staying up all night being vigilant.
At around 4:00 AM Boyfriend woke up and he was like "have you been awake this whole time?" and I was all "yeah" and then he finally felt sorry for me and agreed to go upstairs and sleep in the safe room with me but he ruined it by acting all cold and miserable and I felt bad but I still judged him for not being a survivor like me.  I finally fell asleep around 5:00 AM when Boyfriend stopped shivering so violently because he was either dead or in such a late stage of hypothermia that he had started to feel warm again.
I woke up again at around 8:00 AM because I heard a loud crashing sound downstairs and it was probably a rapist and I started to congratulate myself for being smart enough to sleep behind a locked and barricaded door but then I noticed that the door was not locked or barricaded and Boyfriend was gone.
I went downstairs because I figured that Boyfriend was probably lost or something, but no.  He was sitting on the couch drinking coffee and playing computer games.  I said "You abandoned me."
Boyfriend: "It was too cold upstairs."
Me:  "So you just left me all by myself in an unlocked room?"
Boyfriend:  "I was down here on the couch the whole time."
Me:  "What if there was a murderer in the spare bedroom and he snuck into our room and killed me before you could run up the stairs and save me?"
Boyfriend:  "That wouldn't happen."
Me:  "You sound so sure of your ability to get there in time."
Boyfriend:  "No, I mean there is not a murderer in the spare bedroom."
Me:  "But what if there was?"
Boyfriend:  "There isn't."
Me:  "You don't know that."
Boyfriend:  "Yes I do."
Me:  "I suppose you also 'know' that there are no orcs or rapists in the meth-cellar?"
Boyfriend: "Yes.  Yes I do know that."
Me: "I'm never going to sleep again."
It turns out that that's a pretty empty threat.  I usually make it until 4:00 or 5:00 AM and then my eyelids get too heavy and I fall asleep for a few minutes only to awaken in a panic because I let down my guard and I am sure that I'm about to die and I open my eyes and everything is just shapes and darkness and I'm almost positive that I see an orc lurking in the corner so I fumble for the light-switch but I can't find it fast enough and I get that all-encompassing tingly feeling that starts at the base of my spine and spreads outward until I am absolutely positive that I will be attacked at any second and I NEED LIGHT RIGHT FUCKING NOW!!!!! and then I finally find the light-switch and the light comes on and I see that no, it wasn't an orc, just a table, and I am flooded with humiliation and relief.  That adrenaline spike is usually good for another 15 minutes of intense vigilance, but I inevitably fall asleep again and end up repeating the whole process until Boyfriend wakes up to go to work or tricks me into falling asleep in my panic room so he can sneak out and leave me for dead since he's so sure there aren't any murderers in the spare bedroom.  It's like he's never even seen a horror movie.  Murderers are fucking everywhere and if you leave your bedroom door unlocked, sometime during the night the camera will zoom-in on your doorknob and the doorknob will turn slowly and guess what?  There's a serial killer or a zombie or a rapist on the other side and now you're dead because you were so sure that there wasn't anything in the spare bedroom.  But I'm too smart to fall for that because I'm a survivor and Boyfriend is more like the guy who goes to check on the weird noise and pretty soon he's just a headless torso with the words "YOU'RE NEXT" scrawled across its chest and then it turns into a media frenzy and I have to frame the story to preserve Boyfriend's dignity because otherwise he'd just look retarded for dying like that when his death was so clearly preventable with a little bit of common sense.
I'm pretty much the only reason he's still alive.
UPDATE:  I am still up at 3:00 AM partly because I'm scared to go to sleep in the living room and also because I wanted to get a screenshot of this:

I could go outside right now and spit on the ground and it would freeze within seconds and then I could spit on top of the spit and it would also freeze and I could keep doing that until I made a tower of frozen spit.  Like a sand castle.  Kind of.
UPDATE #2:  And that's why I shouldn't post at 3:00 AM.  I end up writing about spit-towers.  And then writing about how I wrote about spit-towers.
Facebook Twitter Telegram