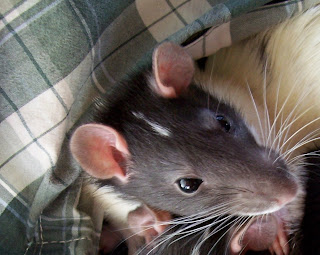 Sasha had surgery today. She had to get a tumor removed. I am quite attached to Sasha and her surgery was a little risky because she's getting to be an old girl, so I was a nervous wreck until the vet called to tell us that everything was fine.

When I picked up Sasha from the vet, she was all dopey and looked almost dead.  I picked her up and held her to my chest to keep her warm and she stared up at me with her big, confused eyes because I'm sure she had no idea what was happening but she was glad I was there.  It was like watching a small child trip on acid.  Not that I have ever done that or would ever do that, but I can certainly imagine that it would at least somewhat resemble what a rat on Isoflurane and opiate pain relievers looks like.

My point is that it was heartbreaking.

My sympathy has faded a little since I brought her home.  She's obviously fine and I'm pretty sure she has figured out how to guilt me into giving her treats.  She started trying to chew out her stitches, so I gave her a banana.  She ate the banana and then left the stitches alone for a little while.  The next time she started chewing at her incision, I gave her another piece of banana to distract her.  She soon figured out that chewing on stitches = banana.  Now, she goes to chew on her stitches and I give her a piece of banana and she sets the fucking banana down, looks straight at me and starts nibbling her stitches again like "Oh, I'm sorry... did you want me to stop doing this?  You don't want me to make myself bleed all over the place?  Well, then I would suggest that you give me more bananas..."

Operant conditioning is a bitch sometimes.

Anyway, that's why I wasn't around today.

P.P.S.  You know what?  Fuck John Wayne Gacy too.  I didn't know who John Wayne Gacy was, so I googled that shit and now I'm never going to sleep again ever.  I got sucked into reading every detail of his life and couldn't stop even though I desperately wanted to and Boyfriend saw what I was reading and he was like "Oh no!  What are you doing?????  Stop it!" because Boyfriend can see the future and he knew that I was going to make him put another deadbolt on our door.  And guess what?  He was right.
Facebook Twitter Telegram