Don't Ever Fall Asleep Watching "Land of The Lost" 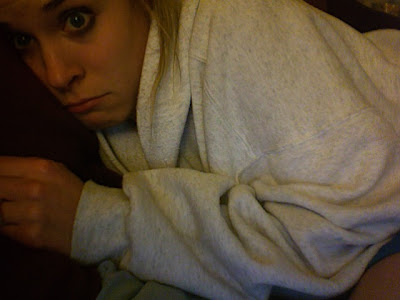 I think that I might finally have Swine Flu.

I'm all achy and pokey.  Most doctors don't understand what I mean when I say I'm feeling "pokey," but "pokey" is what you feel like when the mere act of existing with other molecules results in an uncomfortable poking sensation on your skin.  I can almost feel the particles pinging off of my face.

My stomach feels... crawl-y.  If stomachs could crawl sneakily, that's what mine would be doing.   I'll be lying on the couch debating whether an empty stomach or a full stomach would be more detrimental to my health and suddenly I feel this little rippling inside of me.  I say "Stomach! What the fuck are you doing?" And my stomach makes a little shivering motion and gurgles and I interpret that to mean "Oh nothing... just go back to doing what you were doing.  I'm fine.  Really.  I'm totally fine and not at all trying to sneak away to find another body that doesn't eat things like 'cheese pancakes'"

Cheese pancakes are when you put cheese in a frying pan and then as it's melting, you try to make it into a pancake shape with the spatula.

Anyway, I fell asleep watching "Land of The Lost" yesterday.  "Land of The Lost" is not a movie that you should watch if you have a fever and there is any chance whatsoever that you could fall asleep while the movie is still playing.
If you fall asleep while watching "Land of The Lost" (especially if you are already semi-delirious from fever) you will awaken in a hell of confusion and fear.  A hell in which Will Ferrell is running away from a dinosaur and you have no idea why he's doing that and then he's running away from a giant crab and then he's running away from Sleestak which are the creepiest fucking shit ever and then there's flashing lights and a monkey-person peering out from behind a rock and all the while danger music is playing and you are almost positive that you are not going to survive.
Now imagine that you were having a dream in which your hands are giant and your body is tiny and you've just figured out that nouns are a conspiracy but every time you try to tell someone about the noun conspiracy they turn into a land-capable shark and then you wake up and you are only several feet away from the television because you fell asleep on the floor and this is what you see/hear:
One second you are asleep dreaming about land-capable sharks and the next you wake up and you're all "Oh no! Giant crabs! What's Will Ferrell doing there? DINOSAUR!! Watch out Will Ferrell! Why do my hands feel so tiny??  NOW THEY'RE HUGE!!! MY HEAD IS TINY!!!!!  HOLY CRAP HOLY CRAP HOLY CRAP I'M ALMOST POSITIVE THAT I AM IN SERIOUS DANGER!!!!!"
And then you get up and crawl onto the couch because the couch is safer than the floor and you curl into a ball and just wait it out because there is nothing else you can do and you are too terrified to take action.
And that is why you should never fall asleep watching "Land of the Lost."
Facebook Twitter Telegram