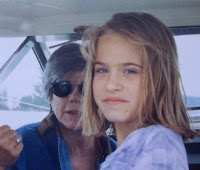 I started my period before everyone else.  It happened so early that my mother hadn't really had a chance to warn me about it beforehand.  I think maybe she tried to talk to me about it, but I heard the words "vaginal bleeding" and some sort of psychological defensive-mechanism kicked in and I stopped listening.

At any rate, I don't think it is even possible for an 11-year-old to be mentally prepared for "vaginal bleeding."  It is also pretty impossible for an 11-year-old to understand unrestrained maternal exuberance over the commencement of said vaginal bleeding.  I would also guess that it is fairly hard for mothers to understand why their daughter would resist publicly celebrating her passage into womanhood.

Basically, there is no good way to start your period.  But this is how I started mine.

I was playing basketball with my friends Joey and Sarah.  I had been hydrating like a champion, so I eventually had to excuse myself to take a bathroom break.

When I pulled down my pants in the bathroom, I was shocked to see what I thought was poop in my underpants (for all you guys out there: periods often start off brownish.  Just FYI.  Aren't you glad that you are reading my blog and I taught you that??  You're welcome.)

My first thought was "What have I done??  I am waaaaaaay too young to start losing control of my bowels..." I sat there on the toilet staring at my disgustingly brown panties and trying in vain to come up with a logical course of action.  I was too distracted worrying about my future of fecal incontinence to devise any sort of concrete plan.

When I had collected my thoughts enough to actually take action, I wrapped the incriminating underwear in almost a whole roll of toilet paper, put the wad of toilet paper and supposed poo-panties under my shirt so that I could walk out to the shed and retrieve a shovel without being intercepted by a questioning friend, dug a hole and buried the evidence of my failure.

I walked back into the house, put on a forced smile and a fresh pair of underpants and rejoined my friends outside.

After playing basketball for another half-hour or so, I felt a slightly "off" sensation in my underpants.  I went to the bathroom again and discovered that I had shat myself again (or so I thought).  How could I be pooping myself without even knowing it?

I went through several pairs of underwear and more than a few psychologically crippling episodes of burying my soiled failure-panties in the backyard while feeling paranoid about being discovered before the accidents in my pants began to look legitimately like blood.

At that point, I thought I was dying.

But I was too embarrassed to tell my friends that I was pooping in my pants inadvertently and had just recently started bleeding from what I was pretty sure was my butthole.  I just kept playing basketball with them like nothing was wrong, excusing myself to go cry in secret when necessary.

When my mom got home from work, she asked me what was wrong.  It took her awhile to fish it out of me.   I finally said "Mom, I think I am bleeding in my underwear... like maybe from my butt..."

To which she responded "OH MY GAWD!!  My baby girl is becoming a woman!!"

I didn't know what to make of this, but my mom looked happy, so I was at least reassured about my prognosis.

My mom sat me down on the edge of the bathtub and told me all about what was happening to me.  She told me that I was not bleeding from my butt, but actually I was bleeding from my vagina - which didn't sound a hell of a lot better to me and it didn't explain why I had been pooping myself, but whatever.  She told me way more than I wanted to know.  She told me about ovulation and how my uterus was making a special lining for a baby and that now I could actually have a baby if I wanted to and that girls my age actually did have babies in the middle ages, but times have changed so I probably wouldn't be forced to marry some 45-year-old king and bear his royal heirs.  She told me that I would probably bleed a lot, but not to be alarmed because I would get used to it since it was going to happen to me every month "just like the full moon" until I went through menopause at which point, I would have hot-flashes and be really grumpy and wish I could have my period back.  She talked a lot about goddesses and the power to create.  She said "empowering" probably 18 times.  She made it sound like I had just earned my membership into some secret cult of women who bleed from their hoohoos.  She showed me how to use a Maxi pad.

I was eventually allowed to return to playing with my friends who had miraculously been entertaining themselves for the entire duration of my mom's extremely thorough explanation of periods.  They didn't even ask where I had been.  Nevertheless, I remember being so paranoid that they knew what was going on.  I felt like my Maxi pad was the size of a mattress.  "What if they think I am wearing diapers??"  I wondered.  "What if I bleed so much that it soaks through my giant maxi pad and then everyone in the world will know that I bleed from my vagina?"  It was horrifying.  I was so glad when my friends went home and I could finally weep openly about my dismal future as a disgusting vagina-bleeder.

The next few days were a haze of odd gifts and clandestine meetings with my mother's Native American friends (who apparently understand periods better than anyone else).  I was given crystals, pieces of ribbon, bundles of sage... I heard all about how "sacred" I was as a woman.  I learned about my power animal (moose) and how people used to use corn-husks instead of Maxi pads.

It was all very confusing.

My mom wanted me to be "empowered" and develop a positive relationship with my body, a relationship based around an intimate understanding of how I am connected to Mother Earth.  It is a wonderful idea in theory.  In reality, it made me feel just a little weird.  I guess I didn't quite grasp the connection between "bleeding from vagina" and "Earth goddess."

A week or so passed and the horrors of my first period slowly faded to minor but permanent psychological scars.   I started to be able to enjoy life again.

It was Wednesday when I went to my friend Selia's house while my mom was at work.  My friend Sophie was there too.  As the summer day was winding down, we got all giggly and decided to play Truth or Dare.  Sophie went first:

Sophie:  "Allie... have you started your period yet?"

I though I had dodged the bullet, but on Sophie's next turn, she kept probing:

Sophie: "Allie, are you sure you haven't started your period?"

Selia: "Yeah.  It's in the faucet.  Are you nervous about something?"

We walked into the kitchen.  As I was leaning against the counter chugging unnecessary amounts of water to avoid having to answer more questions about my "condition" I noticed a little lavender slip of paper on Selia's refrigerator.   It had stars and moons on it.  And my name.  Wait... what??  I looked closer.  The paper was an invitation. It said:

"MOON TIME CELEBRATION.  Allie has started her 'moon time!'  Please join us in celebrating this special event in Allie's life! (There was a date, but I don't remember what it was)"

There was some stuff about passing on the gift of womanhood to the next generation, but I stopped paying attention.   I appreciated that my mother had tried to protect my fragile dignity by using the code-word "moon time," but I think she drastically underestimated the ability of my friends to decipher such a phrase.

I honestly do not remember what happened next.  If Sophie or Selia ever read this, maybe they can tell you.

The next memory I have of that day is being picked up by my mom when she got off work.  I was furious:

Me:  "You gave an invitation to Selia's mom inviting her to some stupid period party that you are throwing for me... and now everyone knows!"

Mom: "Oh Sweetie, don't be ridiculous. The party is just for us parents - we're putting together something special for you... Wendy would never tell Selia about it...."

Me:  "She put the invitation up on her refrigerator!"

Mom: "I want you to have a positive experience of your first period... I want to gather all the people who know you and love you together to give you support and guidance..."

Me: "How many other people did you give these invitations to??"

Me: "What am I going to tell my friends?"

Mom: "Just tell them the truth."

Mom: "Yeah.  They'll all get their periods some day too and then you can help lead them through it."

I don't remember whether I had fun or not.  The Moon Party may or many not have even come to fruition, but I strongly suspect that it did or at least that it happened somewhere possibly without my knowledge because I have a box in my closet at home labelled "Allie's Moon Box."  It is full of pretty rocks, bundles of sage, heartfelt notes about my feminine power, ribbons and a lock of my hair.

I take the box out sometimes and look at all the gifts and read the notes.  I even used the sage when I got scared of moving into the apartment on 3rd Street because I was sure that people had done really bad things in there and it made me uncomfortable when I was trying to sleep and my mom came to visit and brought the bundle of sage and we "cleansed" the apartment of negative energy by burning it in my room.

And my friends did start their periods.  Sophie started hers at my house.  I wanted to rub it in, but I settled on being a good friend and leading her through it.  I showed her how to use a Maxi pad.  She said it felt like riding a horse.  I said "yeah... I know."  And then we laughed until Sophie's mom (who became just as emotionally unstable as my mom when she found out her daughter was finally bleeding from the hoohoo) came to pick her up.

P.S.  Speaking of being totally empowered, here is a kickass picture that Amber sent me: 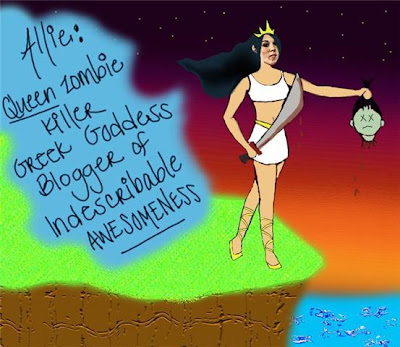