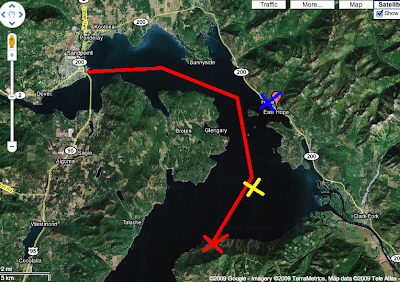 Note: I swear on my mother that this is a factual account (except that Brian isn't actually retarded.  I think.)


As an 18-year-old, I had not yet fully grasped the concept of mortality or how my actions could increase or decrease my likelihood of experiencing it.

When I was invited to go boat-camping with four guys and a 32-pack of Natural Ice, I was all for it.   You might think you have some idea of how this story ends based on that last sentence, but trust me, you don't.  If it was possible to have any premonition of what was about to happen to me, even my stupid 18-year-old brain would have opted out.

But no one ever expects to end up sleeping on a pee-stained mattress in some meth-addict's yard.

Maybe I should go back a little and explain.

It was my friend Geoff's boat.   Geoff, Joey, Brian and Willie had decided to drive it out to a tiny, secluded island (red X on map) that was surrounded by jagged rocky cliffs.  A place where no cops could find us and reprimand us for our underage drinking.

We loaded all of our stuff onto the boat and set out toward our 900-square-foot section of paradise.

It took about 45 minutes to drive the boat out there.   We set up camp on the rocky beach and cracked into our overly abundant alcohol supply.  I had only been drunk once before and I did not yet know how to pace myself.

Just as the sun was starting to set, we got a phone call from a friend back on the mainland (how we had cell service on our island, I will never know, but I do know that there is no cell service in the middle of the lake).

The friend wanted to come to our island.  She wanted to be picked up.

I was so drunk, that I agreed to be a passenger on a boat driven by an even more drunk friend.  Again, you may think you have some idea of where this is going, but I assure you that you do not.

We drove safely all the way back to the marina, where our friend was waiting.  She decided that she didn't want to come camping after all.  We were too drunk to be mad.

We turned the boat around and set off across the water to our unmarked, unlit camping site.   In the dark.   That would have been a good enough adventure on its own, but we ended up mired in another problem entirely.

Halfway across the lake (approximate location of yellow X on the map), our boat ran out of gas.  Now, this particular lake, as you may have surmised from the part where I said it took us 45 minutes to get to our island, is very, very large (see attached map).  So large that all we could see around us were tiny specks of light on the distant shore.

Brian was passed out, so he didn't care.

We sat in silence for a few minutes, each contemplating our respective fates as best we could under the influence of way too much beer.

We took turns (well, everyone except for Brian) sitting on the bow and rowing.  We rowed for hours.

Lakes are really cold at night and I was wearing only a swimsuit, so I had to wrap myself in life jackets to keep warm.  At least I was safe (from drowning, at least.)

At approximately 3:00 AM we reached land (blue X on map).  The land we reached was the bank of a highway near a bridge.

I was told to stay in the boat and protect Brian.  The other boys would go try to find gas somewhere.

An hour later (by my calculations, which could be totally skewed by lapses in consciousness) the boys returned with two mangy-looking men.

I remember actually being able to taste the terror in the back of my mouth.  Maybe it was just bile - I don't know.  Whatever it was, it tasted terrible and it didn't make me any less nervous about the tattooed strangers that were quietly assessing my swimsuit/lifejacket-clad body like curators at a museum.

It was later explained to me that the boys did not realize they had left their wallets on the island until they had walked all the way to a gas station and pumped gas into their gas can.  They had been drunkenly haggling with the attendant, when two upstanding young drug addicts appeared out of nowhere and gave them an offer they couldn't refuse:  a free place to sleep (as opposed to staying on the boat?).

We left the boat tied to a pointy rock and followed the two men up the embankment and along the highway (we couldn't have gone far because I am sure someone had to carry Brian).  We eventually ended up at their "house" which was basically an old barn that smelled like drain cleaner and failure.

The leader of the two men pointed to a dilapidated pup tent that was half buried in garbage and unruly weeds.  Apparently we were supposed to sleep there.

All five of us climbed into the one-man tent and tried to sleep on the urine-soaked children's mattress that had been provided for us.

I don't know if I actually slept or just passed out, but around 5:30 in the morning, we were shaken awake by the gnarliest of the two men.

He said "Give me thirty-five dollars."

"Wha...?" was the collective response from the urine-tent.

"I said, give me thirty-five dollars.  For rent."

It became clear that the man expected us to pay for our stay in his excrement-coated tent.  Drug addicts are remarkably resourceful at coming up with extra income!

Thinking quickly, or perhaps just telling the truth, Joey said "We don't have our wallets right now... we'll pay you in the morning."

This seemed to satisfy the man.  He stumbled away.

Brian started to regain consciousness.  We filled him in on why he was in a foul-smelling tent in some meth-head's backyard.  He told us that he had his wallet on the boat - it was hidden so no one would steal it.  We were simultaneously furious and very pleased with Brian.

We ventured a peek outside the tent.  One of the men was lying face-down in the grass.  We couldn't see the other man.

Geoff snuck out to go find Brian's wallet, fill up the gas can and retrieve the boat.

He came back a little while later in the boat.   He killed the engine and drifted quietly to shore.  He motioned for us to climb aboard.  We stumbled (as quietly as we could) into the boat.   Geoff started the engine, which woke up the man in the yard.  He looked at us groggily.  We tried to back out of the dock quickly, before the man could wrap his drug-weathered brain around the fact that he was not going to get his thirty-five dollars.

The man staggered to his feet like a wounded mammoth and began to bellow something like "F*ckers!  You have my money!" (It was hard to tell because he was slurring his speech).

We got the boat going just soon enough.

We drove to the nearest marina and filled up the rest of the tank.

We drove the boat back to our island in the broad daylight.

(You may think that the adventure is over.  But it's not.)
When we got there, Joey, Willie, Geoff and I wanted to go to sleep.  Brian had other plans.

He felt bad for passing out and not being able to tell us where his wallet was, so he became hell-bent on cooking us breakfast.

Now would be a good time for me to tell you a little bit more about Brian.  The name "Brian" is an anagram of the word "brain" which is ironic because Brian has always teetered between "self-aware-but-slow" and fully retarded.  Not literally, but almost.  He just lacks even an iota of common sense.  He is the kind of person that gets A's in school but turns around and tries to cook baked beans on a portable barbecue grill, not pausing to consider the incongruity between the size of baked beens and the size of the spaces between grill slats.

And he did just that.  After trying to open the beans by smashing them against a rock (and looking surprised when 3/4 of them splattered all over the place), Brian proceeded to pour the beans on the grill.

When that did not produce the results he had envisioned in his head, he switched his focus to cooking "bean-smoked" hotdogs.  Twenty of them.

The point is that we decided to leave Brian alone and go to sleep in the tent while he figured out how to cook us something.

We poked our heads out of the tent.

THE ISLAND WAS ON FIRE.

Brian had decided to grill our twenty hotdogs in the shade of one of the three pine saplings on the island.    We think he may have poured lighter fluid directly onto them, but we can't be sure.  At any rate, he did not consider that fire plus low-hanging branches equals burning.

He was trying to put the fire out with the left-over beer.

By the time we realized what was happening, we could do nothing but stand there and watch the foliage on our precious island burn to the ground.

And that is the story of how I got stranded in a boat, slept behind a meth-lab and played a part in burning down an island all in one night.