Chick feed for a good start in chicken life

Why is good chick feed so important?

The chick feeds on the yolk sac for the first two days after hatching, but then things get serious. To turn a chick into a healthy, strong chicken, you need a special chick feed. This provides the animal with everything it needs for its growth. 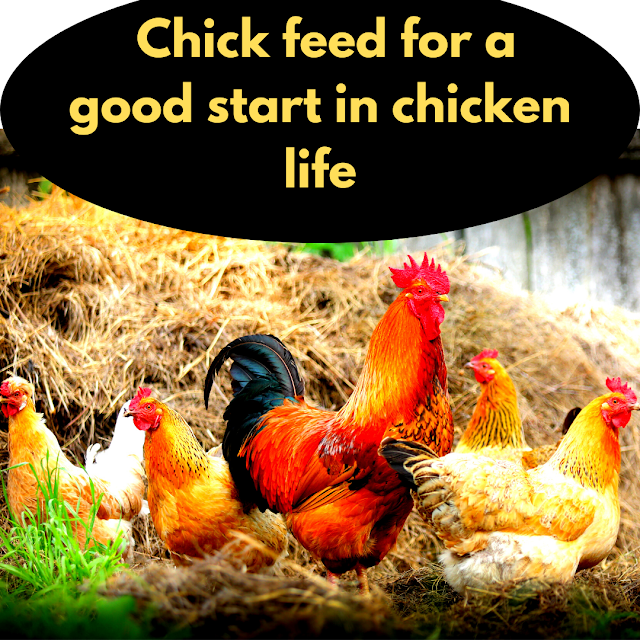 Chicks still have a lot to grow and therefore need different nutrients than a large chicken. For example, the need for protein is higher. Malnourished chicks do not thrive and often show developmental disorders later.

The food in the first weeks of life is therefore important for the entire chicken's life. Deficiencies can often hardly be compensated later. What you miss at the beginning cannot be made up for even by the best laying grain. Many chickens with poor primary care remain smaller, more vulnerable, and underperforming throughout their lives.

When do chicks start feeding?

Before hatching, the chick pulls the yolk sac into the abdominal cavity. The yolk provides the young animal with enough food for about the next two days. From the third day at the latest, the chick needs special food.

But many chicks like to nibble out of the bowl on the first or second day. So it makes sense to have a bowl of chick feed and a bowl of water ready right from the start.

The feed given to the young chicks immediately after hatching is called chick starters. This feed is specially tailored to the needs of newly hatched young animals. It contains essential amino acids, minerals, and vitamins in the required amount.

The consistency is either pelleted or coarsely floury. The size of the food crumbs is perfectly adapted to the small beaks. The newcomers get the chick starter until about the third week of life.

Our tip: In the first few days of life, a bowl with a rim no more than two to three centimeters high and a diameter of about eight to ten centimeters is ideal for feeding. Later, when the little ones are more agile, it is worth using a special feeder. This can be easily filled in from above. The forage edge is divided into small plots. This reduces the problem of defecating and running around in the feed.

The chick-rearing feed has a different nutrient composition than the chick starter. After all, needs change with age. This food is also enriched with the required amount of amino acids, trace elements, minerals, and vitamins. Of course, the energy balance is also right, because the chicks need a lot of calories to grow.

The chickens receive the chick-rearing feed until about the eighth week. Then the females are ready for the pullet feed, which accompanies them until just before they are ready to lay eggs. Depending on whether the cocks are intended for slaughter, there is a special fattening feed for them.

The composition is always slightly different depending on the variety and manufacturer.In general, the following ingredients are particularly common in chick feed:

Corn forms the easily digestible and nutritious basis for many feed mixtures for chicks. Soy provides valuable protein. Depending on the variety, the feed contains a carotene supplement for beautifully colored plumage and brightly colored legs.

Chick feed with and without coccidiostats

There are chick feeds with and without coccidiostats on the market. Those with coccidiostats contain a drug that prevents the onset of coccidiosis or cures an existing infection. The most feared is appendicitis, also known as “ red chick dysentery ”. Affected chicks get bloody-brown diarrhea. Responsible for the disease are small protozoa, the so-called coccidia. These impair the absorption of nutrients, delay growth, and damage internal organs.

Chicks between the ages of six and eight weeks are particularly susceptible. To avoid high losses, the EU allows various coccidiostats as feed additives for chickens up to 16 weeks of age. The active ingredients are critical during fattening because they get into the meat. Most coccidiostats require a waiting period of up to five days. The drug also passes into the eggs. Laying hens must therefore not eat any feed containing this additive.

Our tip: Vaccination against coccidiosis between the first and ninth day of life protects the chicks from infection for life. The live vaccine is administered via drinking water. The vaccine is usually only available in doses of 1,000. A merger of several chicken farmers is worthwhile.

If a mother hen has chicks, then of course she can also eat their food. The chick's food does not harm her. Conversely, the laying meal does not contain the optimal nutrient composition for growing chickens. While the mother hen is raising chicks, she does not need any special laying feed because then she will not produce any eggs anyway.

Can you make a chick feed yourself?

Some chicken farmers swear by their feed mixtures. While most prepackaged chick feeds come in the form of flour or pellets, mixing it yourself lets you see exactly what's in the meal. An adequate supply of protein is important.

The following ingredients are suitable for the production of chick feed:

For the chicks to be able to take in the food with their beaks, they must be well chopped up. A mortar is best for this.

A popular part of the feed is eggs, after all the chick has been feeding on the yolk for weeks. Since, in contrast to commercially available chick feed, the proprietary composition mostly contains moist components, it is necessary to feed the chick several times a day. In the early days, the chicks get about five to seven meals a day. After about four weeks, the number is reduced to three.

Our tip: The chicks only eat small amounts, especially at the beginning. There must be nothing left over because the leftovers spoil quickly.