Teacup Persians have become very popular in the past several years, especially since many are also owned by celebrities. 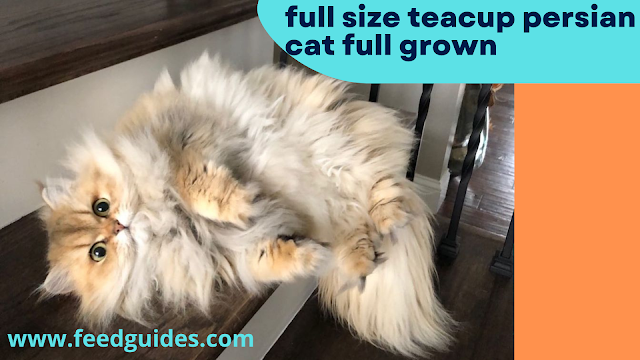 But is size the only thing that makes this breed popular? How long do Teacup Persians tend to live? Do they have any health issues?

Read on to find out the answers to all of these questions and more.

As its name suggests, these Persian cats are miniatures of their larger or, rather, full-sized counterparts.

While adult Persians can weigh anything between 9 and 10 pounds, Teacup Persians will only weigh around 5-6 pounds (when they reach adulthood).

A very important detail that we must note is that the Teacup Persian is not considered a breed per se.To date, it has not been recognised by The International Cat Association or any other organisations.

The history of the genetic mutation dates back to the 19th century as according to some sources, some of the first Teacup Persians were developed in Britain around the 1870s.

Even though breeding these kittens remains controversial and problematic since they are prone to developing many more health issues compared to their full-sized counterparts, they’re still bred across the United Kingdom, United States, and Canada.

The sky’s the limit when it comes to what colour combinations your Teacup Persian kitten can come in.The parents’ physical features can be considered a good clue as to how the kitten will look.

The most common colours Teacup Persians can be found in are golden, chinchilla, and silver — and these are also the most expensive ones.

Other colours range from cream and cameo to black, blue, smoke tortoiseshell and blue smoke.In terms of facial features, Teacup Persians share their physiognomy with their bigger counterparts.They can be doll-faced, or they can have the classic flat face of standard Persians.

The doll-face is a bit more popular, and that’s because, at this size, flat-faced Teacup Persians can have significant breathing difficulties.

Like their full-sized counterparts, Teacup Persians tend to be gentle and calm.

They appreciate quiet living environments most of all, and while they do get along with children, they like to be petted instead of handled roughly.

What’s interesting about this breed is that it doesn’t have anything against spending some time alone.It almost never suffers from separation anxiety or depression.

However, Teacup Persians tend to get stressed a lot when being taken to the veterinary clinic or when their owners leave town to go on vacation, and the kittens are boarded.For this reason, we recommend getting a pet sitter (or asking a friend) rather than boarding your cat if you want to go on a trip.

Like full-sized Persians, Teacup kittens can inherit a series of genetic disorders.For example, they are more prone to developing urinary tract health issues, such as polycystic kidney disease (PKD), bladder stones, and cystitis.

The worst thing is that they also are predisposed to developing hypertrophic cardiomyopathy, which can be very hard to manage.

Chronic respiratory issues aren’t uncommon in this breed, either, and asthma is the most frequently encountered one in Teacup Persians (due to their snub nose).PRA (Progressive retinal atrophy) is perhaps the most common health complication that most Teacup Persians develop.

Many kittens can become entirely blind by the time they reach 20 weeks of age. It’s also worth adding that Teacup Persians tend to live shorter lives than full-sized Persians.If, for example, you can expect a regular Persian to live for at least a decade, very few Teacups ever end up being this old.

In general, Teacup Persians require much more care and veterinary assistance than regular Persians, and since they are also more likely to get sick often, you will have to go to the animal hospital for at least 3-4 check-ups per year.

Caring for a Teacup Persian Cat

Besides all of the health issues that Teacup Persians can end up suffering from, they are also less equipped to handle the cold.

They cannot regulate their body temperature as well as regular Persians, which means that their living environment has to be warm at all times.Because their bones are smaller and frailer than normal, Teacup Persians can develop arthritis and suffer from fractures a lot easier.

This means that you have to ensure that your cat’s living space doesn’t pose any health risks although even a light fall could lead to a bone fracture.

The rest of the Teacup Persian care you will ensure is standard, meaning that you will have to get your cat vaccinated against potentially lethal diseases, go to check-ups at the vet clinic several times a year, and also groom your cat’s coat.

You will also have to get your kitten some toys, a cat tree, a cat bed, and any other accessories that you feel might be useful in preventing and combating boredom when you aren’t home.

Because Teacup Persians tend to have oral health problems, you will have to feed your kitten the best possible diet you can afford. You can even make your own homemade cat food if you feel unsure about any commercially available diets and this might be better since most food brands have artificial colours, preservatives, binders, and many other chemicals that your cat does not need.

If you do decide to give your Teacup Persian kibble, make sure that the size of the food is appropriate.Do not continually feed your Teacup Persian diets made for kittens purely out of convenience as they are usually much richer in protein and minerals and are not fit for adults.

Teacup Persians do not have to be bathed unless they are very dirty.

Cats do a very good job of cleaning their own bodies, which saves you a lot of time, effort, and pain (since not many cats love water).As for grooming, you will have to brush your Teacup Persian’s coat at least twice a week since they do tend to shed and can also develop hairballs if they ingest too much fur. A good quality cat brush can save you a lot of trouble in the long run.

If you insist on being a Teacup Persian owner, we strongly advise you to look for the best possible breeder in your country.

There are many groups on Facebook and other social media networks where Teacup Persian parents go and talk about breeders and the experiences that they have had with them.

Teacup Persians are miniature Persians that have a gentle and quiet personality.Unfortunately, they are predisposed to a series of health complications, so if you are not prepared to make a long-term investment (a financial one, too), this might not be the right breed for you.

However cute they might be, teacup kittens are generally less healthy compared to their regular-sized counterparts. Normal-sized cats are perfectly accustomed to living in apartments.