Somehow I Ended Up Fighting Zombies...

Sunday, 31 January 2010
Facebook Twitter Telegram
I was searching through my unpublished entries for something to post today and I found this and added some illustrations.  I wrote it way back at the beginning of September when Boyfriend and I first moved to Hamilton.

Boyfriend was being all whiny yesterday about how we never do real-person things like hang out with friends or wake up when it's still morning or eat at the Olive Garden.  I was like "I hate pasta and we don't have any friends here yet... but we can wake up early if you want."

Boyfriend: "What time should we get up?"

Me:  "I don't know.  What time do successful people wake up?"

It might have worked out better for me if I didn't get so damn excited about nothing at night.  When most people are getting ready for bed, I'm sitting on my couch, vibrating with pent-up energy.  I have no idea what I get so excited about, but whatever it is, it's really, really, really exciting! 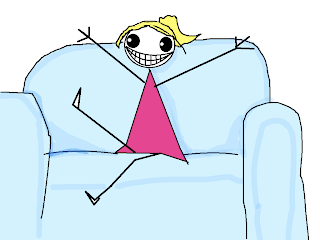 This problem is especially acute when I know that I have to wake up early.   Whenever I have to wake up early, I feel like I'm getting ready to embark on a dangerous adventure.  I imagine that this is the same feeling you would get if you were trying to fall asleep the night before your first summit of Mt. Everest.  Like you're either going to die or accomplish something amazing.

I try to talk myself down from this hyper-excited state, but it usually only exacerbates the problem.  I say to myself "Go to sleep.  There is absolutely nothing exciting happening tomorrow.  You are probably just going to wake up, crawl downstairs and fall asleep on the couch." But then I feel like I'm trying to trick myself.  I think "This is probably just a cover-up for what's really going to happen tomorrow morning... I'm probably going to die.  Or win a million dollars!" 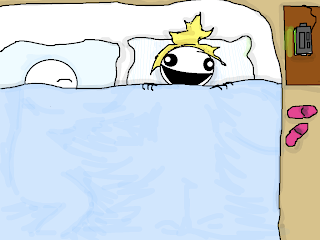 Around three or four o'clock, I will usually have exhausted my body's stores of adrenaline and I'll fall asleep instantly.  This is when I start having crazy dreams.  For some unknown reason, my crazy dreams usually start in an empty parking garage.  The parking garage has little or nothing to do with the rest of the dream, but it's always there, like a portal to crazyland, signaling that the rest of the night is going to be full of flying and running and falling and spaceship crashes and Boyfriend is probably going to cheat on me with a robot and then pretend that it didn't happen even though I know it did because he has a glowing green spot on his face since apparently that's what happens when you sleep with robots and then I try to punch him in the face, but my hands are spindly and weak and it turns out that Boyfriend is actually a shapeshifter because suddenly he's a bear and instead of arguing about how he slept with a robot, I'm running away and trying to find Santa Claus because that's the only way to survive a bear attack but it doesn't matter anyway because now I have to fight a gila monster.  And suddenly there's salsa music.  I get absurdly angry at the music.  It feels like it has been playing for hours and I am so sick of it that by the time I wake up and realize that it's actually my alarm clock, I'm ready to fight an army of orcs with my bare hands.  My face and pillow are plastered with saliva.  My eyes are almost swollen shut because I was sleeping on my face.  I'm disoriented and angry. 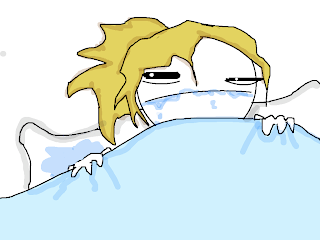 Obviously this is not the part I was excited about.   Actually, I don't even remember what that part was.  At that point, all I know is that I'll never be excited about anything again because everything is stupid.  My alarm clock is stupid, my pillow is stupid, the sun is stupid, feelings are stupid, grass is stupid, Oprah is stupid, bricks are stupid, birds are stupid - everything is stupid and I hate it.
This feeling usually subsides a little once I get coffee, but on this particular morning, I did not get coffee because Boyfriend was like "Do you want to go for a run?"
Me:  "Running is stupid."
Boyfriend: "You don't really think running is stupid."
Me:  "Right now I do."
Boyfriend:  "Okay, well I'm going."
Me: "Wait!  FINE.  I'll go."
Boyfriend:  "Okay, put on your shoes."
Me:  "I'll put on your face."
Boyfriend:  "That doesn't make sense."
Me:  "You don't make sense."
And then we started talking about Face-Off.
Okay.  I now understand why I didn't publish this before.  There's no real ending to it.  I must have realized this when I wrote it, but for some reason I forgot.  I thought "Oh, I'll just draw some pictures, edit a few details and write a nice little closing paragraph!" But I was wrong.  It's not that simple.
I can't just be like "And then we went running and it really sucked and I yelled at some cows just because they were there.  The End."  So I'm going to make up an ending.
After we finished talking about Face-Off, Boyfriend and I headed out the door to go for our run.  That's when we noticed the zombies.  There was an entire herd of zombies in our yard!  We were like "Go away, zombies!"  But the zombies were like "NO!" so we had to fight them.  Boyfriend went inside and got his assault rifle and I just started punching.  And then Boyfriend was like "Get out of the way!" And I dove to the side and he started mowing down zombies and our neighbors didn't even care because they were dead.
Anyway, fighting zombies turned out to be really easy because zombies are slow and stupid and Boyfriend and I are fast and smart.  We just shot their knees out and then kicked their heads in.  It was really violent. 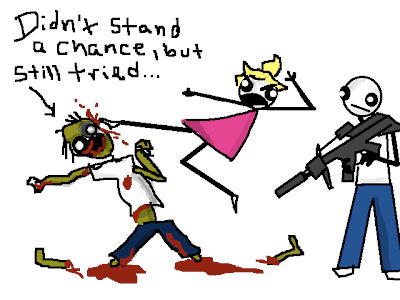 Anyway, we killed all the zombies and then went for a run and it sucked and I yelled at cows just because they were there.
P.S.  I don't know if there is a proper name for a group of zombies, so I just called them a "herd of zombies."  But it's probably actually something like a "flight of zombies" or a "kindle of zombies" or a "bantam of zombies" or something.  It's almost definitely a bantam of zombies.
UPDATE:  I'm officially putting my support behind "zeppelin of zombies" submitted by Going Like 60,  even though I hate alliteration.  "A zeppelin of zombies" just sounds so natural, especially since I used to get Led Zeppelin and Rob Zombie mixed up.  I know.  There is nothing even remotely similar or confusing about those two names aside from the tenuous connection between three letter first names and last names starting with Z.  I probably shouldn't even admit it publicly, but I just did.  I confuse Led Zeppelin and Rob Zombie and that's why I'm supporting the term "a zeppelin of zombies."  At the very least, getting that term officially recognized would lend some credibility to my confusion, even if only retroactively.
Since there is no official name for a group of zombies yet (though a few have been suggested) I propose that we act to get the phrase "a zeppelin of zombies"officially recognized.
UPDATE:  Shit.  "Legion of zombies" has also been suggested and now I don't know which one to choose.  Thanks Maggie... way to make something that used to be totally simple not simple anymore.  This may have to be settled with a poll.
Facebook Twitter Telegram