Wednesday, 16 December 2009
Facebook Twitter Telegram
I injured myself yesterday.  You might be wondering if this injury occurred while I was rescuing a child from a burning building, but no. It didn't.  What happened was that initially, my head was facing straight forward.  Then I decided that I needed to look at something to the right of myself and I turned my head in that direction so as to center the object in my visual field.   And then God was like "You shall be punished for this!!!!!!" and He sucker-punched me right between the shoulder blades.   And then He whipped out his switchblade and started stabbing me in the spine and I was like "OH GOD NO! WHAT DID I DO???  I DON'T UNDERSTAND WHY THIS IS HAPPENING TO ME!!" And then God kicked me in the neck for questioning His decisions.

So there I was, writhing on the floor in agony and then I realized that writhing was making it worse, so I stopped writhing and settled for contorting my face into an expression that said "This is ouchie... please make it stop."  But that also seemed to aggravate the wounds that God inflicted upon me so I tried to lie perfectly still but I still had to beat my heart and it is completely unfair when beating your heart is painful.  That's like being stabbed every time you don't die.  Or something.  I guess I pretty much just described normal stabbing.  But that's what it's like.  And it is unfair.

I eventually got bored with lying on the floor, so I tried to crawl to my couch.  You know those scenes in war movies where the soldier is bleeding from every possible surface on his body and his face is covered in blood and dirt and there are explosions all around him and he probably won't make it but he's trying to crawl to safety anyway?  And then he gets shot one more time and you think he's dead, but no.   He's still crawling?  I think I finally know how that feels.  And aspirin doesn't fix it.

Here is the place where I ask all of the people who only recently discovered my blog to go and read this post  instead.  Surprisingly, you will respect me a lot more that way.  Please do it.  For both of us.

Anyway, I'm really, really, really obscenely bored today because I can't do anything at all except for sit with awkwardly rigid posture.  And type.  And I can't even type very well because typing involves looking at my computer screen and that means that I have to tilt my head slightly downward.  Oh, and I'm high on Lortab.

EDIT:  And then I posted a totally inappropriate Christmas card and I admitted to having enjoyed playing Magic: The Gathering when I was young and I thought it was all going to be hilarious but actually it was like this one time when I told my ex-boyfriend's mom a joke about a dead hooker and apparently she wasn't really all that enthusiastic about dead-hooker jokes.  Anyway, then my high kind of turned paranoid and I decided to delete all that stuff until I can decide whether or not it was actually as terrible as I think it is right now.  You're welcome.

P.S.  If you didn't get to see the things that I posted before, I am sorry.  However , the possiblity exists that I will wake up tomorrow and go "Oh, that wasn't so bad... it's not like I talked about how I used to have a crush on Rick Moranis..." and then maybe I'll decide to repost it.  Maybe.

UPDATE:  Okay Veronica... I'll post one picture.  Just one.  And only because you are my internet girlfriend.  Do you want the inappropriate Christmas card or one of the four Magic cards I edited myself into?  Choose wisely. 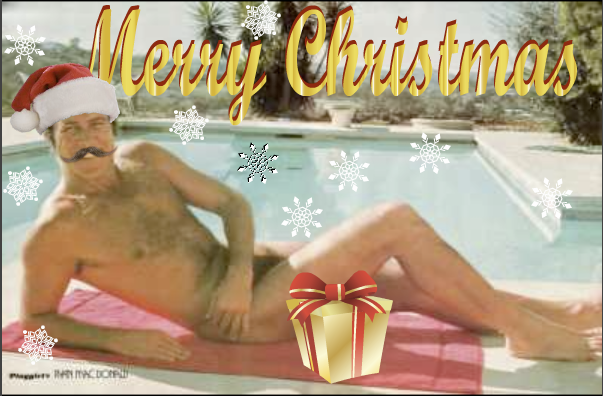 Can you believe I'm giving this to you for free??  It probably would be best to print this out and send it to your loved ones with no return address and no signature.  Please also consider including a single dollar bill.  The recipient will wonder "What am I being paid for?  Why just one dollar?  Is this a tip or something?  OH GOD WHAT IS IT FOR????" 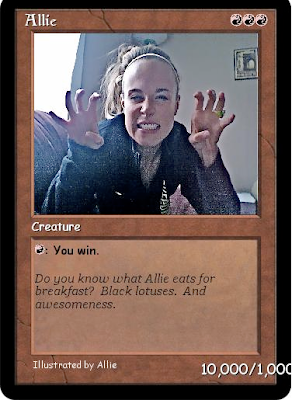 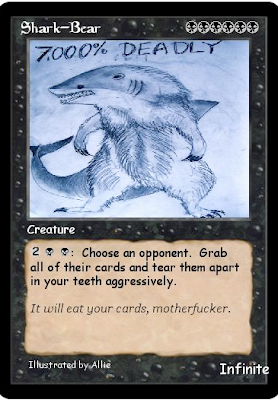 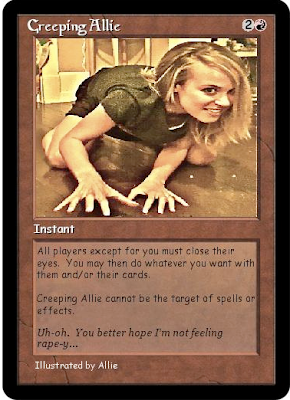 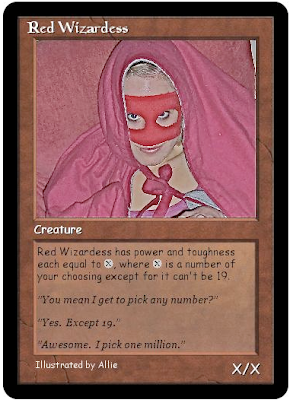