Women Are Not Bears 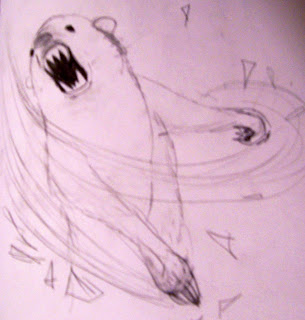 I wrote something for Cracked.com today.

I originally intended it to be an advice piece about relationships and communication because that topic has mass appeal and I want to be famous, but no. My article turned out to be mostly about bears.

I wrote about bears because, as I was writing about relationships, I made a bear-related analogy and then it spiraled and the whole thing kind of became bear-themed and before I knew it, I was writing almost entirely about bears.

I'm probably not going to get famous by writing about why women are not like bears, but you never know. I like to think of it as niche-writing.

Anyway, if you want to read my article about why knowing how to tell the differences between women and bears could save your life, then go HERE.

It's kind of about relationships, but it is mostly about bears.

If you suspect that you may have been exposed to a bear, please go to the hospital.

EMERGENCY UPDATE: A few of you conveniently pointed out some common but often lethal misconceptions about bears:

Tim from infinitely funny blog I'm Not Benny said: "Rosie O Donnell is kind of like a bear. I'm not saying she IS a bear, I'm just saying that there is something called electrolysis in the world and it's not beyond the realm of reason that she might actually be made out of bear.

So that's why I always ask women if they've had electrolysis. If they say yes I immediately start banging cooking pots together and screaming SHOO BEAR, SHOO!

Tim, you make a good point because Rosie O'Donell IS the most dangerous halfling shapeshifter there is, but I feel compelled to point out one fatal flaw in your logic: If you were able to successfully shoo the creature away by banging pots and pans, it most likely actually was Rosie O'Donell and NOT a bear. Unless it brutally maimed you and deflowered your skull before it left. Then it was probably a bear. But it could also have been Rosie O'Donell still. It's a fucked up world, Tim.

Carlston from If Carlston Made Blogs (and let me tell you, if Carlston made blogs, they would probably be a lot like this one) said: "I always wondered why my dates kept eating entire tubes of toothpaste until I hid them up trees. Thanks for the insight, Allie"

Again, I feel the need to clarify. Carlston, your dates were most likely WOLVES and not bears. Bears don't give a fuck about toothpaste - they want your blood and there is nothing that can distract them from that ultimate goal.

It can be very difficult to tell what is truly a bear and what is merely a dangerous but not 100% fatal animal. It is very important to understand that if it is not actively destroying you, it is probably not a bear. Even if you think you are safe because you are on top of a mountain and you can see the bear lumbering around in the valley - that's not a bear. If it was a real bear, it would instantly teleport to your pathetic mountaintop and slaughter you without remorse. In fact, most modern-day images of bears are actually of Rosie O'Donell. She is much less aggressive and easier to photograph. It is difficult to say whether anyone has been able to successfully capture a bear on film, but my instincts say it is doubtful. The lack of photo evidence with which to identify bears makes them even more of a threat to your safety.