My Tweenhood was a Haze of Baldness and Shame 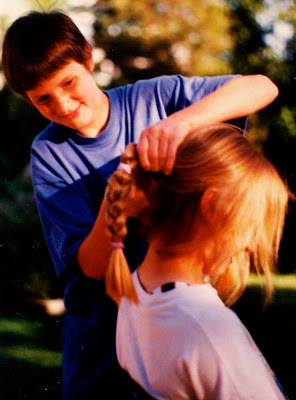 It was a quadruple-dog dare.  I didn't want to look like a coward.

It all seemed like a fantastic idea while it was happening.  I was the center of attention - especially in the eyes of the boy who had dared me to do it.

I really liked this boy.  I had liked him since the 5th grade.  He had always been cooler than me, which really wasn't very hard to accomplish.  I mean, I wore wolf T-shirts, had giant braces and thought that it was socially acceptable to own elastic-waisted jeans.  I don't know how I came to the conclusion that shaving my head would make things any better.  I really didn't think it through properly.  Like I said, I really liked this boy.  I thought maybe I'd look like Demi Moore in G.I. Jane.

I called my mom at work:

Mom:  "Um... (prolonged silence in which I am sure she felt torn between her duty to protect my self esteem and her duty to allow me to express myself)... It's your hair sweetie.  Do what you want."

My mother passively taught me a very important lesson about thinking things through.

My friend didn't just use the dog clippers.  He braided my hair, cut off the braid, used the dog-clippers on me and then went and found my mom's razor in the shower and shaved my head until it sparkled.  Everybody laughed.  Allie is so crazy!  I laughed too.  Look at how silly I am!  I am out of control!  I am so extreme right now...

...My time in the spotlight lasted about 4 minutes.

That evening, I eventually got around to looking in the mirror.  I had never been very self-conscious - I didn't have the fashion sense to know what to be self-conscious about.  But I knew ugly when I saw it.  I spent about an hour transfixed in front of my hairless reflection.

I wondered why I didn't look like Demi Moore in G.I. Jane.

Was it my jawline?

I calculated how long it would take my hair to grow back.  I started to weep. (You can laugh.  It's okay.)

The ensuing months were filled with the kind of life experiences that force a person to develop their "inside beauty" lest they become devoid of any value whatsoever.

For example, I was waiting in line for the next stall in a public restroom and a little girl started screaming "this is the girl's bathroom!" I soon realized she was screaming at me.  I looked her dead in the face and said "I'm a girl."  Neither of us walked away without significant psychological damage and gender confusion issues.

Despite having my gender-identity ruffled, my interest in boys began to intensify.  Looking back, I am so sad for myself.  The futility of it all was mind boggling.  My best efforts at attractiveness only succeeded at making me look vaguely like something you'd see in Cirque de Soleil.   Apparently, this wasn't what the boys were looking for in a girl.

My friends were getting into makeup.  Not wanting to miss out on the fun and hoping to disguise myself under a thick layer of feminine awesomeness, I joined in.

We were terribly misdirected in our attempts at looking beautiful, so I ended up strutting around town with whore-red lipstick (it was like a neon frame for my giant, gnashing braces!), bright blue eye shadow and a nice, shiny, bald head.  I think I may have been wearing my wolf shirt.

Sadly, my best attempts at looking feminine and smokin' were not convincing enough.

I had been selected to play the lead in the school musical that year.  However, the lead role was a woman and my appearance-altering decision made it difficult for me to effectively portray that.   My teacher gently requested that I give my part to a more "convincing" classmate.  Instead, I was to play a male role.  To make it worse, I had to sing.  Like a man.  All I remember is being up on a stage, fake beard clinging fake-beardedly to my face, belting out some annoying song in my best baritone and wondering how my life had gone so wrong so early.

My hair eventually began to grow back, as hair is wont to do.  First I looked like a skinhead or cancer patient, then like a Chia pet, then like a marine, then like Gary Busey and finally, kind of girl-like.  I got rid of my wolf shirt.  I started plucking my unibrow.

Gradually, I began to fit into society again.  I almost learned how to put on makeup.  I bought a dress.  I even got my first boyfriend.  I think he turned out to be gay, but whatever.  If I was going to look like a dude, at least he reassured me that I looked like an attractive dude.

The important point is, I made it.  I survived the catastrophic ugliness that once shrouded my future in uncertainty.  And I learned an important lesson about being mindful of the consequences of my actions.
Kind of.

Okay, so here it is in all of its blurry, hairless, dog-presenting glory: 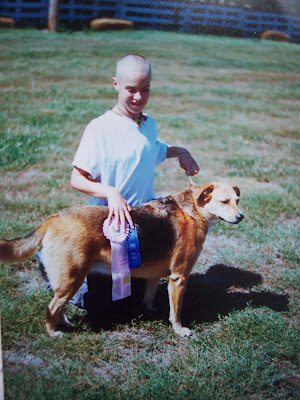 P.S.  I think my dog (who was usually a morbidly obese chunk of pure disobedience) won that ribbon only because the judges thought I was a cancer patient.  After the competition, my mom overheard them talking about the "poor girl with no hair... what do you think she has?  Do you think it's terminal?"

My mom interrupted them and said "you must be talking about my daughter.  She did it on purpose.  There's nothing wrong with her physically."

I like how she included the word "physically" to insinuate that yes, there may be something wrong with me mentally but I definitely didn't have cancer  :)